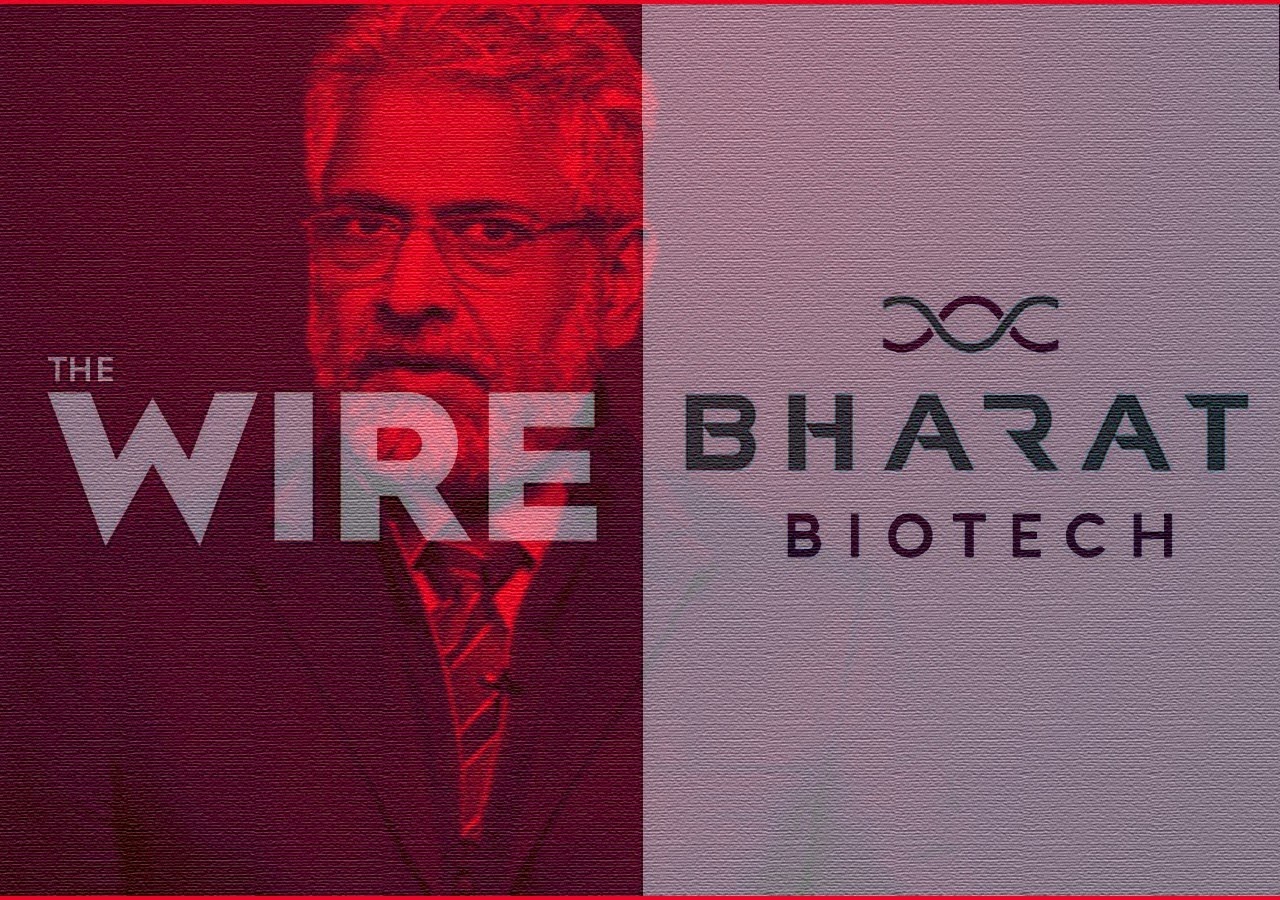 Leftist propaganda portal The Wire employed on the payrolls of ‘Big Pharma’ to write, publish and propagate malicious, factually incorrect, and misrepresentative stories against indigenous vaccine makers has got a fatal shocker from a Telangana Court. Hearing a defamation suit for ₹100 crore filed by Bharat Biotech against the media portal, the Ranga Reddy District Court in Hyderabad on Wednesday ordered the factory of fake news The Wire to take down 14 articles it had published on its website within 48 hours.

Furthermore, according to Bar and Bench, the court ordered the news portal, its founder and editor Siddharth Vardarajan, and several others named in the suit from publishing any defamatory articles relating to Bharat Biotech.

Senior Counsel K. Vivek Reddy, appearing for Bharat Biotech argued that the media portal continued to publish articles laden with false allegations, even when the Government of India, after a very rigorous process of testing, had passed the vaccine.

Reddy stated, “The Wire published several articles making false statements without proper fact check about the regulatory approvals granted to Bharat Biotech. Even after the Government of India had approved the vaccine, articles continued to be published otherwise in on The Wire.”

The court noted Reddy’s argument and observed that Bharat Biotech was the only company to develop and manufacture vaccines for inoculation of children between 15 to 18 years in India. Thus, allowing The Wire to publish its defamatory pieces may have contributed to vaccine hesitancy.

Reddy further asked the court to take action at the earliest. While the news portal has been directed to delete the articles, the final fate of the suit may be decided on the next hearing, scheduled for March 16.

However, despite the court ordering The Wire to tame its tendency of spreading false information, Siddharth Vardarajan took to Twitter to express a false sense of bravado which unwittingly can be held in contempt of court.

Vardarajan tweeted, “So 14 deeply reported Covaxin stories – published over a year – ordered to be taken down by a local court with no notice served on The Wire, no chance given for us to refute whatever false claims Bharat Biotech has made against us! Let me say this – BB’s bullying will not work.”

In order to expose the media portals that had been propagating fake news against the Indian companies and also the Indian government, Bharat Biotech had published a thorough fact check which cleared the clutter.

The Wire, in association with Gangandeep Kang – a Professor in the Department of GI Sciences at the Christian Medical College, Vellore, tried defaming Covaxin by asserting that there is no specific response to the immune response generated by the vaccine.

However, Bharat Biotech contested this claim and fact-checked The Wire and its ignoramus professor by means of stating that the immune response of Covaxin had been published in a number of peer-reviewed journals and submitted to regulatory authorities as well.

Ever since Bharat Biotech came up with its Covaxin vaccine, foreign media agencies such as Bloomberg, New York Times, Wall Street Journal, Reuters on behalf of American pharmaceutical giants have started discrediting the Hyderabad-based company by means of running a concerted campaign. Propaganda portals such as The Wire are a mere extension of the campaign, making their trade on the scraps of the big players.

While the left outlets tried their best to create an anti-vaccine atmosphere, the Indian government kept its head down and steadily rolled out the jabs. The entire country owes a tremendous debt to Bharat Biotech and Serum Institute of India. Despite the kind of campaign the left-liberals of the country orchestrated, a majority of us want to offer thanks to the two pharmaceutical giants for their service. The court in its next hearing impose a heavy fine on the fake news machine The Wire and set an example.

Ukraine, US Bio-Labs, and the Ongoing Russian Disinformation Campaign.

Hindu Samhati Protests In Silchar Against The Mizo And Meghalaya Government.