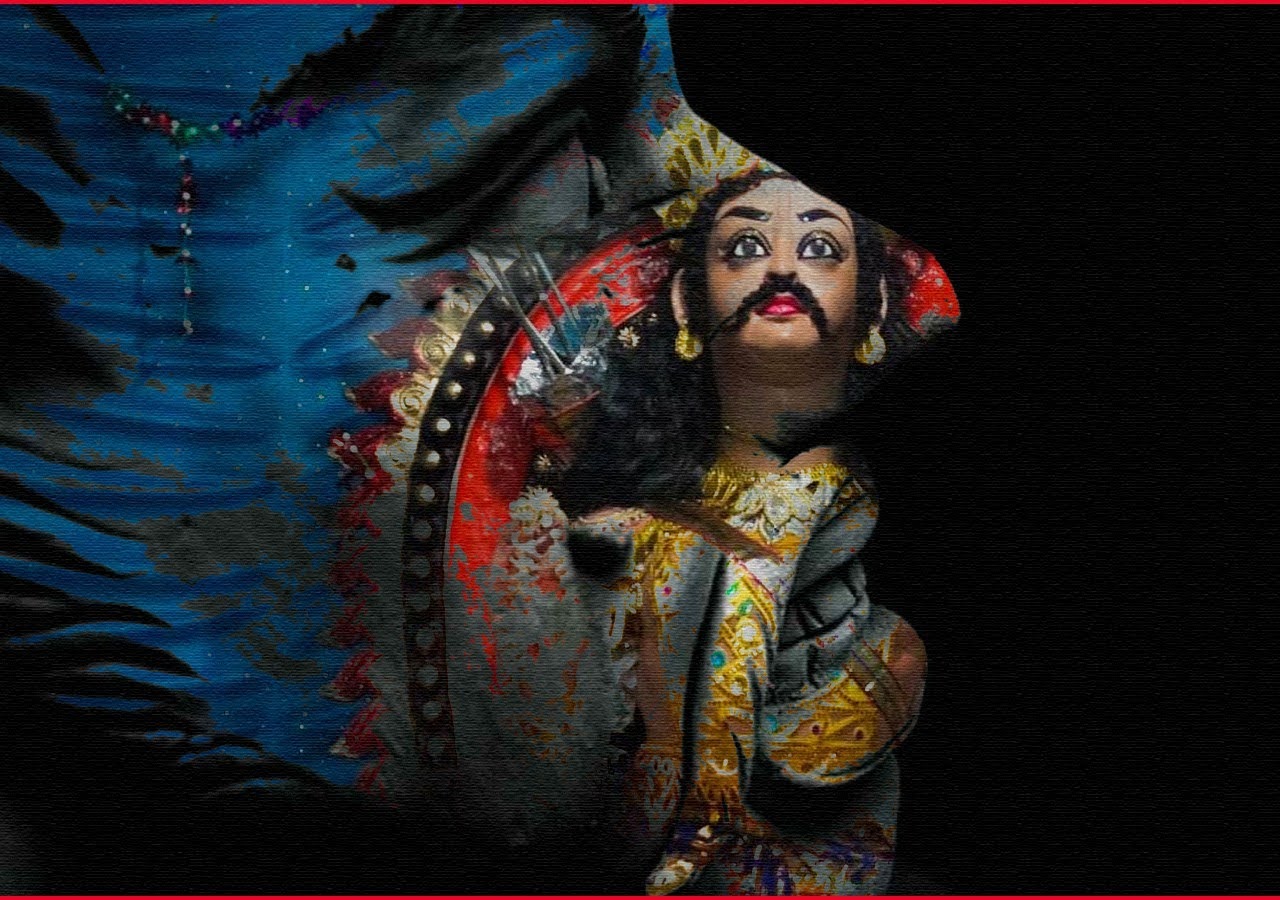 On October 05, 2011, a group of young enthusiasts began the worship of Mahishasura in the villages of Purulia district in West Bengal. A new discourse was constructed in which Mahishasura had been identified with the legendary hero of the Santhal community Hudur Durga.

This new narrative was concerned with the martyrdom of Hudur Durga who was slain allegedly by an enchanting seductress during the “Aryan invasion”. This counter narrative to the myth of the slaying of the demon Mahishasura by Goddess Durga had been propagated through social media. Sushma Asura, a well-known‘representative’ of the ‘Asura’ community, has also endorsed the narrative of the martyrdom of Hudur Durga.

What was the motive behind such an initiative? The answer, perhaps, lies in an interview of Ajit Prasad Hembrom, an intellectual of the Kherowal group of the Santhal community, published in Ainanagar on May 20, 2017. Mr. Hembrom was one of the leading organizers of the Hudur Durga festival. His interview elaborates the ideological preoccupations behind this endeavour.

In the previously mentioned interview, Ajit Prasad Hembrom has claimed that this worship of Asura is the commemoration of the day of martyrdom of Hudur Durga, the glorious martyr of the Santhal community. He wishes to consider Hudur Durga as a martyr who sacrificed his life like Sidho, Kanho and Birsa.

However, it remains a fact that Hudur is only a legendary hero without any archaeological evidence of his existence. Hence, his comparison with historically acclaimed heroes such as Sido, Kanhu and Birsa may be interrogated. Moreover, Santhal and Asura are two different communities. How could the myth of the one be arbitrarily identified with the other? Such questions are obvious. Now, let us have a look at the myth narrated by Mr. Hembrom.

According to Hembrom, Hudur lived in a place called Chaichampa where his treacherous Aryan wife killed him. According to him, “Whichever form this story may be narrated; the marriage is always mentioned in it.” However, the place, which has been acclaimed to be the abode of Mahishasura as well as the place of his assassination, is Mysore in Karnataka. The temple of Chamundeswari, the slayer of the demon Mahishasura is situated to be at the place of his assassination according to the legend. There is no mention of Chaichampa in any of the legends available there.

Moreover, the myth of the slaying of the wife of Mahishasura by Ayappan, the son of Hari Hara is popular in Kerala for many centuries. Hence, legends testify the existence of Mahishasura could be traced only in the southern parts of India, but never in the eastern parts.

According to the Vamana Purana, the divine beauty of the Goddess fascinated the demon Mahishasura. However, Goddess Durga refused to entertain his proposal for marriage. As a result, he came to abduct the Goddess by force and was killed by Her along with his forces. In other Puranas and Upapuranas, the narratives bear resemblance to the narrative of the Vamana Purana.

Nowhere do we find any reference to the ‘marriage’ of the Goddess with Mahishasura. Moreover, the Puranas have conceived lion as the companion of the Goddess Durga, but Chhota Nagpur plateau, the primitive abode of the Santhal community, had never been the natural habitat of lions. It is worthy to consider that the legendary martyr Hudur Durga carries the name of ‘Durga’, an essentially feminine name in Sanskrit and other Indian languages.

According to Mr. Hembrom, “Those days our ancestors did not fight women.” Hence, the Aryans had taken the advantage and sent a seductress to murder the hero treacherously. However, the accounts of the Markandeya Purana, Shiva Purana, Vamana Purana and the other Puranas render prolonged furious battles between the Goddess and the Asura. How could the two different accounts be considered as one?

Mr. Hembrom opines that the divinity of the Goddess Durga and the demonization of Mahishasura have been constructed “in the eyes of the foreigners”. However, many historians have already discarded the theory of the Aryan invasion. Moreover, the binary construction of the conflict between the Suras and Asuras as the conflict between the Aryans and the non-Aryans is also insubstantial.

The legendary demons in the Puranas such as Hiranyakashipu, Vritra, Ravana as well as Mahishasura are all of Brahmin origin. Rambhasura, father of Mahishasura was the son of Danu, wife of the sage Kashyap (See Devi Bhagavata). Kashyap is the son of Marichi, the son of Brahma and Danu is the daughter of Daksha Prajapati. Hence, Mahishasura’s Brahmin origin is indisputable.

In the Varaha Purana, Mahishasura is the son of Mahismati, the daughter of the Demon king Viprachitti. The very term Danava has been derived from Danu. How could a Brahmin like Mahishasura be the hero of an indigenous cult? Along with the Goddess Durga, Mahishasura has also been worshipped as a Brahmin and is depicted with the scared thread. His invincible power was also a boon of the creator God Brahma.

Archaeological evidence also refutes the claims made by the exponents of the myth of Hudur Durga. In so many ancient sculptures, Goddess Durga is represented only as the slayer of a buffalo, not any other human figure. The sculpture of the Goddess Viraja of the Virajakshetra of Orissa represents a woman with two hands and two eyes like a mortal woman holding the tail of buffalo with one hand and slaying it with a spear.

The sculpture of the four-armed Goddess of the Ambika Bhagavati temple of Rajasthan and the sculpture of the female slayer of a buffalo excavated from Mathura should also be remembered in this context. In Bhishma Parva of the Mahabharata, the Goddess is addressed by Arjuna as Mahishasrikpriye meaning the one who prefers the blood of buffaloes. In the sculptures of Vishnu Durga in South India, the Goddess is presented to be standing on the head of a buffalo.

There was no human image of the demon in this phase. Hence, one could infer that in the beginning the Goddess was the slayer of a buffalo. The idea of the buffalo as the magical disguise of an Asura is only a later interpolation through various phases of literary transition. Such a transition could be traced in the sculpture of the half buffalo and half-human Asura of Mahabalipuram and the Bengali version of Mahishasura emanating from the figure of a buffalo.

Hence, the buffalo has been more integrated with the figure of the Goddess than the human form of Asura. The question is whether we disregard all such archaeological evidences associated with the buffalo and the historical transition only to accept the implanted narrative of Hudur Durga, which has no historical basis or not.

Now the question is how and why have Hembrom and his comrades tried to synchronize this myth of Hudur Durga with that of Mahishasura. As Hembrom explains: “…We call him Hudur Durga; never Mahishasura. Only later we realized that our Hudur Durga is known by others as Mahishasura.” As the myth of the Santhal community does not have Mahishasura, similarly Hudur Durga has never been mentioned in the Puranas. The forced relationship is only part of an ideological venture driven by identity politics.

As Hembrom has confessed: “First the thought of Ravana came to my mind. But the stories of Ravana did not have much intersection with our culture. His land was far away from ours.” Hence, Mahishasura appears to be a potent icon to establish a counter discourse. The Radical Left lobby of JNU readily took it up to satisfy its political vendetta against Hindutva. Hence, the myth of Hudur Durga is not a part of the traditions of the Santhal community at all, but a mere political propaganda constructed in 2011.

It is worth remembering that the tradition of the worship of Goddess Durga in autumn in Bengal is not a local phenomenon. In Durgasaptashati, the autumnal worship of the Goddess is also mentioned: “শরৎকালেমহাপূজাক্রিয়তেযাচবার্ষিকী” (১২/১২). As the number of the shlokas in Sri Sri Chandi are well documented and stipulated, no later interpolation was possible. There is no alternative version available of this text.

In the Kalika Purana, Devi Purana, and other texts like the Brihannadikeswara Purana, we come across detailed accounts of the rituals performed in Puja. The Devi Bhagavata tells the story of the observance of Navratri by Sri Ramachandra, while the poet Krittivasa narrates the story of Akal Bodhan, the worship of Goddess Durga in autumn in his Ramayana.

According to historical records, Raja Kangsha Narayan initiated Durga Puja in Taherpur of Rajshahi district of undivided Bengal under the guidance of Acharya Ramesh Shastri in 1480 (887 Bangabda). In an inscription found in the Durga temple there, this history has been recorded. It renders that the history of Durga Puja in Bengal goes back to the 15th century. In popular representations that occur in Bengal, the Goddess Durga is represented in myriads of forms incorporating various traditions.

In Manasamangal and Shivayana, Durga has taken the disguise of a Dombi to deceive Shiva, while in Skanda Puranashe appears as Shavari (A woman of Savar community). One of her manifestations Matangi resembles Chandali (A Chandal woman). In popular Bengali imagination, the ghosts, witches and other supernatural creatures known as Gana (Associates) accompany Goddess Durga. These are, however, not mere local influences. In the Baiyasaki Mahabharata, we come across the story of the meeting between Arjuna and Lord Shiva in which Shiva came in the disguise of a Kirat (an indigenous community) with Parvati as a Kirat woman along with their Gana.

There is hardly any consensus in the Santhal community regarding the myth of Hudur Durga. According to Mr. Hembrom, the popular Santhal festival Dasani or Dasai is a commemoration of the martyrdom of Hudur Durga symbolized by the epithets of mourning. Mr Vivekananda Soren, an intellectual from Santhal community (It is not courteous to define an intellectual in relation to his community, but we are doing it for the sake of rendering academic debate within the community. We sincerely apologise for such a designation) observes that Dasai is worship of Nature to solicit showers on the land which has been affected by drought. The mourning symbolizes the plight caused by draught, rather than the commemoration of a martyr.

Recently, many educated and intellectual members of the Santhal community have dissociated themselves from such propaganda. Three students of Belur Shiksha Mandir, Sushil Murmu, Sumanta Hembram and Sandipan Kisku have said that they not consider themselves as the descendants of Mahishasura. Saraswati Hansda, a woman from Domohani village of Bankura district organizes Durga Puja every year. She claims to have been summoned by the Goddess in her dream. She worships the Goddess through her own indigenous rituals.

The origin of Durga Puja can be traced in the Durgasaptashati, a sub-text of the Markandeya Purana. The text bristles with philosophical, theological and epistemological connotations of the worship of the Goddess. It would be a critical travesty to define it as a treatise on political binaries.

The Goddess in that text manifests herself as ‘Mahadevi Mahasuri’ resplendent in the dialectical conflict of the divine and demonic within the self. Her anger is transcended into forgiveness in course of the narrative. According to the scholars, the narrative of the slaying of the Mahishasura is the allegorical representation of the elimination of evil latent in the mind of man, the devotee of the Goddess. It would be unwise to limit such a transcendental text within narrow walls of political propaganda concerning binaries.

Understanding The Perpetual Hatred For Gandhi.

Baba Taraknath- A Subtle Journey from Mortality to Eternity.