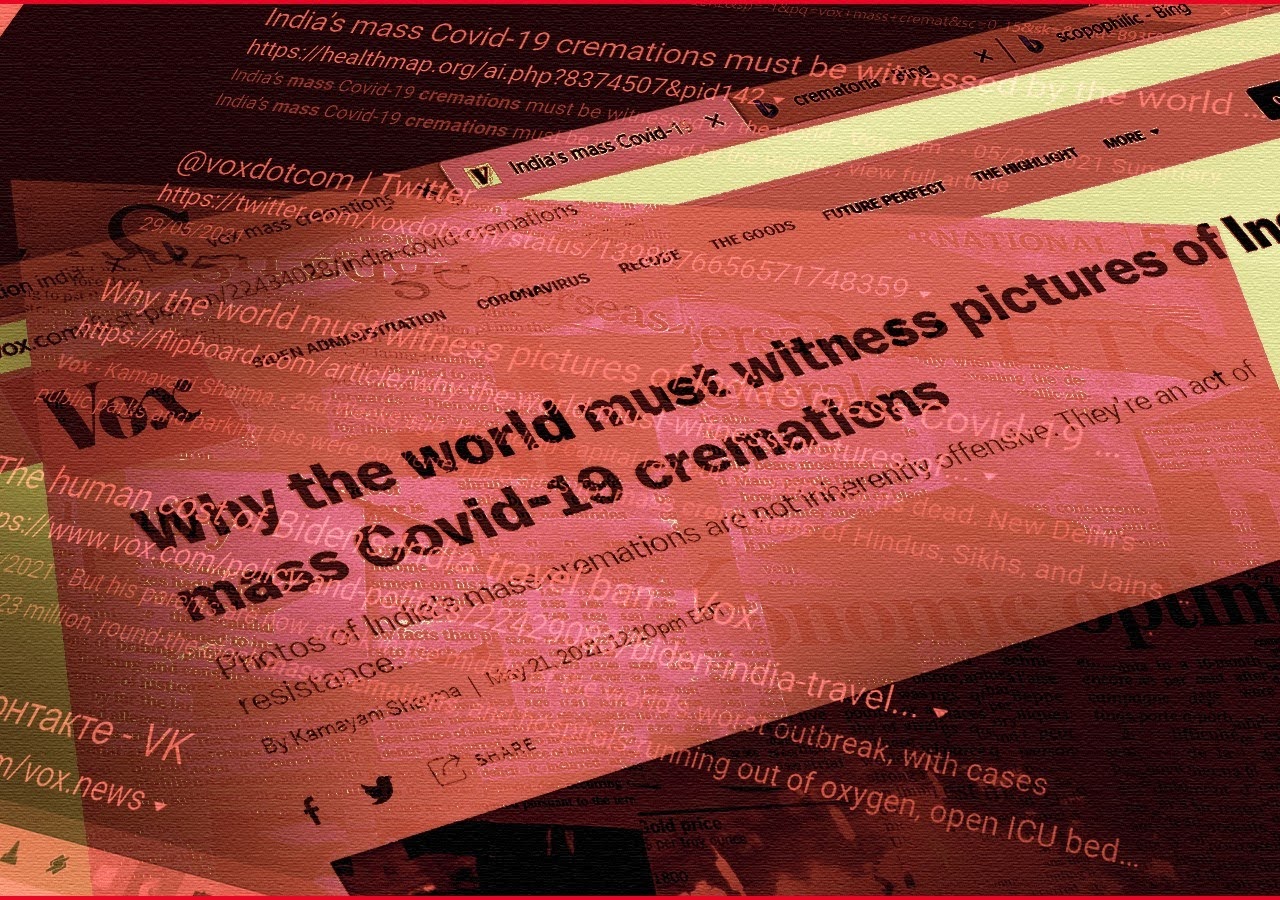 Recently Vox published an article on why the world must witness the images of mass cremations from India. The carefully scripted article [i] by Kamayani Sharma is a perfect example of how the Indian Hindu existence is being subjected to a colonizing, imperial gaze – often by deracinated and insensitive people who may themselves also carry Indian Hindu names.

What makes a person a true indigenous voice is not merely her name or even citizenship, but rather the lens of her perspective. In that regard, Sharma’s perspective in the article in question is sorely starved of any spiritual connection with the Indian Hindu soul. Her article is a series of excuses collated together to offer a justification for a deeply insensitive act committed by some journalists who have derived international recognition from subjecting the material homes of the Indian Hindu soul to a perverse and insensitive scopophilic gaze.

The Vox article in question is an attempt to justify the international circulation of images of the mass cremations in Indian crematoria during the Covid 19 pandemic. It is important to understand why such a justification is not only deeply offensive and insensitive but also fundamentally hostile and opposed to the Hindu existence, and represents an imperial, colonizing, and ridiculously ignorant gaze. In this day and age of decolonization, one expects not only greater sensitivity but also a more informed perspective from a writer and researcher; however, clearly, some writers are still rooted in an oppressive colonial era, deriving inordinate pleasure from any attempt to revive the imperial, oppressive gaze.

It is also important to remember that this imperial gaze is not innocent. As has been discussed by countless thinkers and scholars, it is this imperial gaze which lays the foundation of material domination. To revive this gaze and offer it legitimacy is no different from seeking a return to colonial oppression itself.

Let us understand why the justification of the circulation of mass cremations is a reflection of this imperial, ignorant, yet deeply injurious gaze. The crematorium, for a practicing Hindu, is not a public park for amusement, nor is it a space of repulsive morbidity. Hindu spirituality, rooted in ancient, natural, and highly advanced principles and practices, is deeply connected to the Hindu soul as well as the material Hindu existence.

For the Hindu, the crematorium is a space that accommodates the flows of various kinds of spiritual energy. It is not just a space where you burn the dead without any emotion, it is a space from where the souls of our ancestors, and those of our departed loved ones proceed onto their spiritual journey in other realms. For the practicing Hindu, the crematorium is also a space where we connect with certain deities whom we worship and spiritually reach out to.

Therefore, the crematorium is a sacred space, a space of spirituality and worship, it is a religious space, not a space for insensitive scopophilia. Most importantly, it is not a stepping stone to advance one’s journalistic career and nor is it a fashion accessory to enhance one’s social media profile.

Therefore, eagerly sharing morbid images of bodies burning in the crematorium does not make one an intellectual or an artist. It makes one an opportunist and a seeker of quick attention. It certainly helps one to earn easy popularity on social media, and it encourages a culture of fear mongering based on morbidity. It also helps to attack a government that is already facing an unpredictable and unprecedented situation with a novel virus.

Wrapping a façade of sentimentality around one’s eagerness for morbid images does not make one sensitive to the pain of those suffering from the virus. The lack of sensitivity and emotion is evident and not overlooked by ordinary practicing Hindus who are not blind to this attack on their sacred space by the imperial gaze. Nor do practicing Hindus remain oblivious to the fact that the bearer of this imperial gaze is often a deracinated person bearing a Hindu name.

In the Vox article, the author also uses language that is remarkably alarmist to further justify the propagation of this imperial gaze. To begin with, she claims that photojournalists and foreign correspondents were ‘attacked’ and ‘harassed’ for propagating images of mass cremations and commenting on them.

Words like ‘attack’ and ‘harass’ carry a tremendous amount of weight and give the reader the impression of physical violence on the recipients of such ‘attacks’ and ‘harassments.’ However, when one clicks the hyperlinks on these words in the Vox article, one is redirected to merely critical online articles [ii] and tweets [iii] which have simply indignantly and helplessly defended the dignity of the grieving families and the departed souls. The author herself could provide no concrete evidence of any physical violence or tangible attack or harassment. Instead, she demonized the struggle of decolonizing voices as ‘attack’ and ‘harassment.’ It is important to take note of such language, for besides adding bricks to the structure of the imperial gaze, they also push the reader to delegitimize the struggle of the souls oppressed by the imperial gaze. This doubly victimizes the oppressed and leaves them helpless, defenceless, and at the mercy of an oppressive power that will never let the decolonizing voices be heard.

Withstanding historical persecution, the Hindu community continues its struggle against the imperial gaze long after the colonizer has officially acknowledged sovereignty of the Indian state. The struggle of the Hindu in this context is an uphill battle against not only the oppression of the imperial gaze, but also against the mind-numbing ignorance of those who propagate it. Hindu philosophy has always been about the overcoming ignorance and moving forwards in the path of knowledge.

Twitter Loses Legal Cover in India over Non-Compliance with New IT Rules.