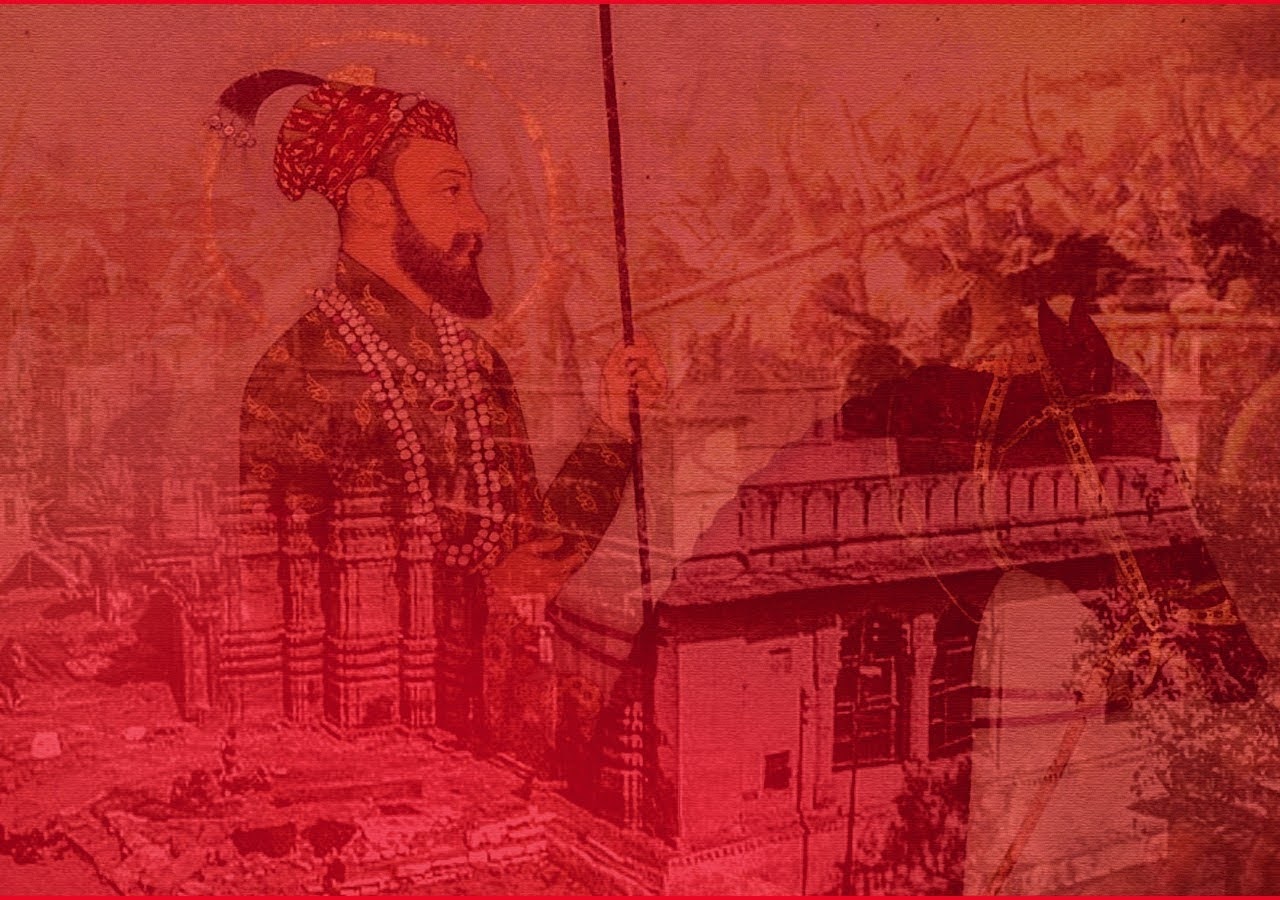 The answers are perhaps partly found in the last chapter of Sir Jadunath Sarkar’s magnum opus the five volume History of Aurangzib, and it can also be said safely that the answers to this query lie, perhaps wholly, like weeds in an uncared for garden, wrapped throughout the thousand years of imperialist aggression that the Hindu Dharma faced, first from Islam, and then from the Europeans and their Christianity.

It is well known, in spite of Audrey Truschke’s propaganda that Aurangzeb, or Aurangzib, shut down the traditional schools of the Hindus, destroyed their temples and imposed the well known jaziya tax on them . This was compounded by the complete disconnect from the lived reality of the past of the Hindus by the loss of these traditional centres of scholarship, that not just suffered from deprivation of royal patronage, but were actively persecuted for being heretical. The state of the Hindus is described thus by Sir. Sarkar:

A social solidarity like that of the Muhammadans was inconceivable among a people divided into countless mutually exclusive castes, with their rancorous disputes about rights to the sacred thread and the Vedic chant, access to public water-supplies, besides touchability and in Southern India also approachability…………….. A Hindu revival like that of the Peshwas instead of uniting them only embittered them by intensifying orthodoxy, leading to a stricter repression of the lower castes by the forces of the State, and provoking more widespread and organized caste feuds ……….”

But what was Aurangzeb’s role in all this?

Aurangzeb was exceptionally abstemious in his private life, was free from the vices that so commonly plagued Mughal nobility, was accustomed to hardship and did not fear labour. He was Alamgir, zinda pir (Alamgir, the living saint) to the masses of Muslims that inhabited this vast undivided subcontinent, so famed was his piety to the God of Islam. Perhaps these qualities would be parroted in any other emperor as signs of incomparable virtue. But in Aurangzib it brought about no effective moderation of views or temperance of outlook.

If anything it only hardened his worldview of himself as his god’s crusader, ghazi, imam, or whatever, on earth. Relentless was his appetite for war, his attitude unforgiving to those that he considered not ‘pure’ enough. So complete was his obsession to create a land in accordance with Islamic canon law that he did not even spare communities like the Ismailis and the Bohras, who were Muslims as much as Aurangzib himself possibly, but were universally branded as heretics.

What impact did such a man have on the nominal majority community in India ? No, he did not have a habit of making mountains of heads as some of the famed conquerors of yore had done. But his intemperate rule also did not allow the inherent genius and potential of the Hindu community to shine forth. Arnold Toynbee once wrote that for civilization to reach its next level of evolution, its inhabitants must not be forced to fend for their existence itself so hard, that they lose the impetus to advance on a spiritual, material and mental plane.

This is exactly what Aurangzeb accomplished. His single minded zeal so completely crushed the already battered soul of the Hindu community that they retreated into the bounds of orthodoxy like never before. The Hindu in Aurangzeb’s reign could not think of scriptural debates, no one could reaffirm the liturgy and processes of essential Hindu ritual in the spirit of the age of the Mughals, let alone ponder over the material sciences which would require royal patronage. They were made so busy in affirming or protecting the focal manifestations of Hindu identity that they were made to forget and, more importantly, they were made incapable of thinking about the Hindu soul and what constitutes it.

Aurangzeb did what almost all Islamic padishahs, or badshahs, or sultans before him had already done. But what stands out is the fervor with which he did it. Not only did Allah’s soldier on earth fail to lead by example, the masses of the majority, he purposefully created a situation in which that same community would descend deeper into a darkness from which there would be no reprieve at least till the battering ram of Europe would impose the Pax Britannica, every bit as tyrannical as the Mughals, and perhaps even more.

In the midst of such cultural genocide and regression, in the face of the least favourable of societal frameworks, the boundaries of caste and gender based discrimination inside of the Hindu society hardened like never before. There were exceptions like Chhatrapati Shivaji, Baji Rao Peshwa, Chhatrasal and many other Hindu rulers who strived to take the land and the community back to the days of yore when there was no Islam on the subcontinent. However, even their political descendants were incapable of side stepping the rules of rigid orthodoxy which, over the centuries, had hardened like hastily dumped cement on a hitherto loose weave of balanced spirituality and religiosity that had given to the world the original idea of “universal divinity” or amritasya putrah.

Since the Hindu political revival lacked a social aspect to it, it failed to unify the country under the banner of a pan-Indian Hindu identity. Those who would like to think that there was no concept of India before the British idea of its colonisation would do better to note the fact that Al Hind, and Indica were names of this sub-continental realm far before somebody named Jesus and later conflated with the figure of the Messiah, the Christos, was born in Bethlehem or when the Caliph Uthman ordered the compilation of the verses of the Quran, the holy book of the Muslims. The Hindu was made to develop a mentality of siege that was so ruinous that they could not think twice about what identity was and its impact on the lived reality of the community.

And thus it happened over the centuries – layer after layer of political and social oppression was heaped on the Hindu community across this land of Hindustan. When conquering new lands and putting down rebellions, Aurangzeb ordered the desecration and destruction of temples, punishing political leaders by destroying the temples that epitomised their power. In 1669, he directed all of his provincial governors to “destroy with a willing hand the schools and temples of the infidels, and that they were strictly enjoined to put an entire stop to the teaching and practi(c)e of idolatrous forms of worship” According to Prof. Richard Eaton’s estimates, these directives often seem to have been targeted not at Hindu temples in particular, but at a more precise “deviant group”.

Attempts to erase Aurangzeb’s atrocity-inclined monarchical character are nothing new. Pakistani historian Sheikh Muhammad Ikram did the same as Audrey Truschke does these days, and stated about Aurangzeb that the emperor “tried to enforce strict Islamic law by ordering the destruction of newly built Hindu temples. Later, the procedure was adopted of closing down rather than destroying the newly built temples in Hindu localities. It is also true that very often the orders of destruction remained a dead letter.” Nicholas F. Gier, however, provides a quite neutral and clear picture of the scene as it was then, during the later Mughals, in his 2014 book, The Origins of Religious Violence: An Asian Perspective.

It is certainly fallacious to quote hard worked research into a few obligatory situations of Aurangzeb not being a bigoted tyrant aiming desperately to be the ‘wali’ he was hailed to be by most of his Muslim subjects. The practice of twisting historical signification to yoke it to a fixed alternative narrative, and blaming it all on the British narrators of Aurangzeb is not really honest historians’ work, one may conclude.

Gandhi’s Letters to Hitler and a ‘Naïve’ Attempt At Satyagraha.

Wokism Vs Education – The “Citizens United” Video that Preaches But Says Nothing.