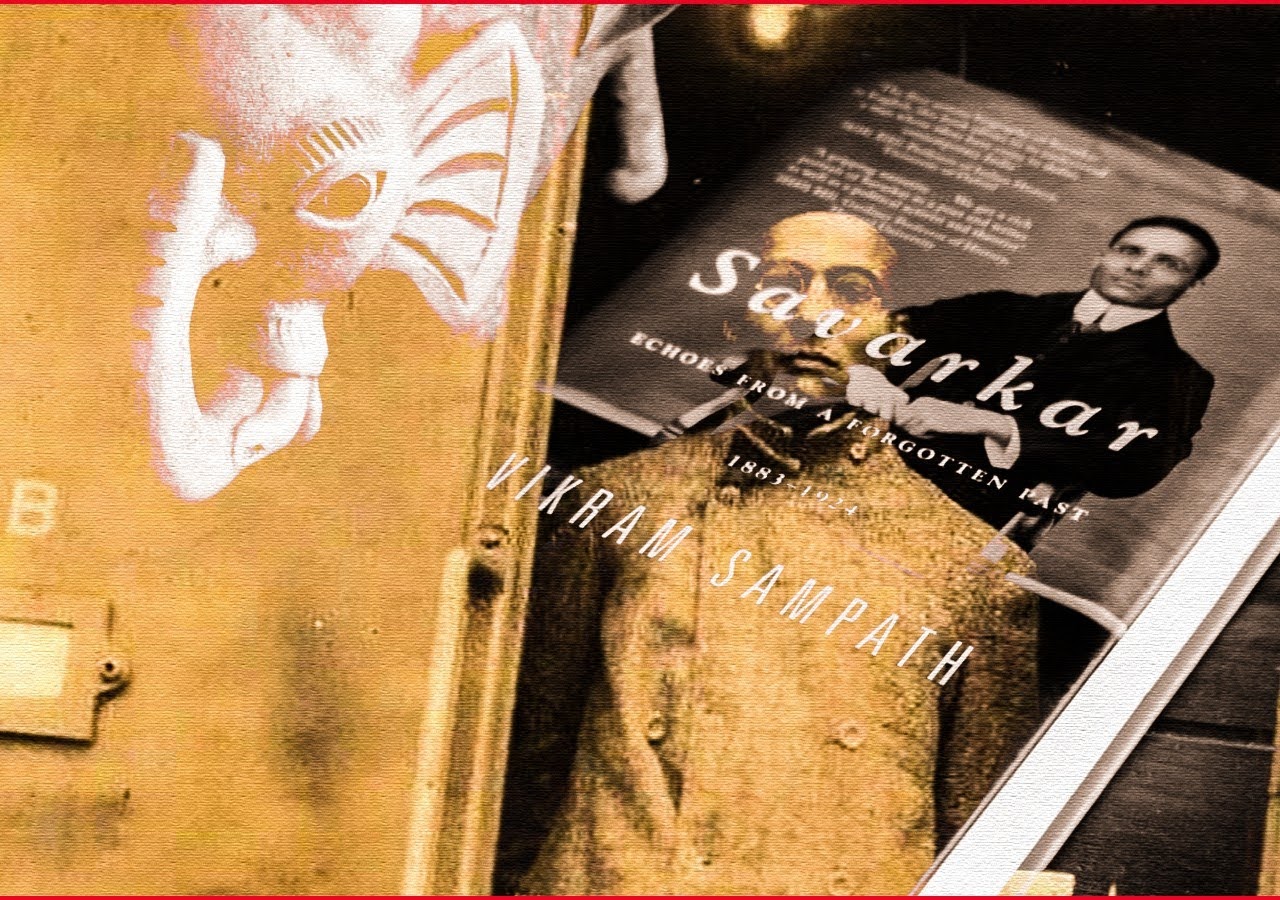 Let me tell you something beautiful about the young and presently one of my favorite historians named Vikram Sampath and his masterpiece Savarkar: Echoes from the Forgotten Past. As soon as I started reading the first page, I became engrossed in his book and wanted to understand every aspect of this man named Savarkar. I read the book multiple times to be someone who’s different from the rest, to not be a fanatic of any kind. People have said that Sampath’s book has eulogised Savarkar or that it has tried to blanket the Hindutva idea of Savarkar or his extremist – nationalist motives. But to be very honest, he had done nothing of that. Let me tell you why. I will not take you towards a false narrative and that’s a promise!

What is the primary task of a writer who is writing history, or to be specific, a historian? To place facts before the reader and then let the reader decide what he/she should do. For example, to know Napoleon, one must have the knowledge of his past life, his contributions to history and to the formation of modern France and his revolution. A person cannot just be classified into black and white. He/She is gray in his/her mind and heart. Take for example, Gandhi cannot be called as the messiah of our Independence for he too was responsible for some very basic pit falls in the history of our nation. On one hand, there is a lot of reportage about how the man we know as the father of our nation was apparently misogynist, caste-ist and was prone to imposing some modicum of oppression on the females in his family. On the other hand, he was a proponent of non-violence and how he united people with these ideas of ahimsa and satyagraha just cannot be kept hidden away in the dark. Savarkar, in many ways, is the same.

Savarkar has his ideological differences with Gandhi, but to deny Savarkar’s contribution to India’s freedom struggle would be the demonstration of our narrow and biased mentality. How Savarkar united the people of every caste and class to fight for independence should be a lesson for everyone. Yes, his Hindutva had its share of poison, but that was a retaliation against Gandhi’s support of the Khilafat Movement. Even then the historian has never tried to cover up the truth. Sampath has written about how Savarkar used to be against the alien power of both the Muslims and the British. How his Hindutva is not ‘legit’ in a secular and democratic India. No, the historian doesn’t escape from writing the truth.

Readers of Sampath’s book may think that he has exaggerated in saying that Savarkar’s contribution towards the freedom struggle is one of the most important contributions. I believe that to be the case as well as Sampath does. But that certainly doesn’t mean that the historian has advocated Savarkar’s Hindutva or supported the cynicism in Savarkar. All that he has done is to have placed the man in front of us.

Nowhere in my comprehensive reading of the book have I found that the historian has tried to show the bright side of Savarkar without writing anything against the darker side. He has written about both brilliantly, and possibly in fair measure. The task of a historian is to not judge the past, but to curate it and to show the people the proper face of those belonging to history. One should read the book first in order to form a solid opinion and not restrict oneself to a bias. Not because it eulogised Savarkar, or criticised him, but because the present historian stands among the few historians who have never tried to lean on one particular side in order to complete the book. And in that context, let us not forget how Savarkar fought against his own Brahmin caste, supported widow remarriage, included Shudras and people of every Hindu caste both in the field and at the dining table.

One has to truly dive into the book to really understand that the political parties and organizations, of the past thirty years, who try to utilize him as their “holier-than-thou” figure, have no idea of what is the actual truth (although no one can know the actual truth, it is just a version based upon facts) of this man and what he did represent. From being one of the fiercest anti – colonial leaders of India along with being a splendid writer of both poetry and prose, Savarkar broke many rules of the then rigid Indian society that one can never imagine his followers being of that selfsame cast of mind even so many years later.

One interesting thing is that Vikram Sampath never tries to exaggerate anything rather keeps it before us with proper evidence to verify it for ourselves, so that like Sanjay Mishra from “Aankhon Dekhi”, we could only believe in something when we’ll be able to see and read the idea based upon proper and authentic facts. He never persuades you to ‘change’ your ideology or way of thinking. Instead, he makes you aware of the reality that can easily make you polarized even if you’re a supporter of the institutions that keep Savarkar at the forefront.

A few years back, I was a strong but blind critic of Savarkar and his thoughts. I seldom tried to read him and may be because before this book no one tried to write about this man because of the ideological conflicts our countrymen are strongly biased towards. Right winger voices eulogized him to an unlimited extent because of which he became a God for many blind followers without them knowing what he had tried to develop in his ideas and principles. Others kept on contradicting him without knowing him because of the different social media outbursts, and much more than that, people, from time infinite, have kept on believing in the words of other people because of which individuals who actually brought many real changes in different parts of the world never came into limelight, and even if they did see the limelight, they were constantly villainized. The truth is that if a lie is spoken multiple times, then people take it as the truth, instead of the factual truth that then goes into hiding behind the lies that have been propounded so loudly. The same happened with Savarkar, very obviously.

Almost everyone remembers Savarkar as the one who started the whole Hindutva movement, but little does anyone bother to focus on that how he tried to break so many stigmas of a particular brand of Hinduism. Right from inter-caste marriage to inter-caste sociality; seeing the rituals through the perspective of objectivity and always questioning godmen; Savarkar was the man who for the first time quoted the battle of 1857 as the “First Battle of Independence”; he was the man, just like Subhash Chandra Bose, gathered Indians living in Europe during his higher studies to participate in the struggle of Independence. I cannot eve finish counting how many parties, people, institutions, educationists and so on I have seen in my life who generally take the initiative of portraying Savarkar just as the ‘saffron’ Savarkar.

Read the book and then only comment on it because I too won’t persuade you to believe in what I am saying. Savarkar has never been and isn’t the “holier-than-thou” figure like Gandhi himself, rather just like how Ramachandra Guha never stops criticizing Gandhi, Vikram Sampath too keeps on pushing us to know more and writes with so much clarity that as a reader one has to really introspect that whether she/he should go with the idea Savarkar is trying to put in the forefront or not, and that I think is the first and last purpose of a good historian.

The problem with India’sso-called liberals and communists lies in the fact that they won’t accept anything that is contradictory to their opinion. They won’t educate their mind with the history that is based on authentic facts, tiresome research and honesty towards history, and this ignorance or narrow mindedness is similar to an extreme right-wing mindset. They too won’t accept anything that is contradictory to their idols, and that makes the society so confusing and chaotic because there’s nothing liberal in staying ignorant and closed. They’re contradictory to each other.

Vikram Sampath is a historian the country is immensely proud of. How he writes is far above me to comment on, but his words have their own magic to keep my mind open enough. He’s the one historian this country really needs. So, yes, the musician cum historian is my favorite from now. A sheer gem this book is! A million words can be said in every possible language I know for the way Vikram Sampath presented before us individuals like Savarkar or Gauhar Jaan, but I’d just like to say that historians like him are doing one of the bravest things every other historian should have done long ago. History, in the subcontinent, has always been written either to please someone or an institution or a party. There are very few historians who wrote history for the sake of their love of history. He is one of them. Or perhaps the only one as I see it.

I am not a right winger. Neither am I a leftist. I just am a reader and I absolutely love whatever Vikram Sampath writes, and the way he presents his words like pearls on a string. No matter whether he does it using a pen or just by the grace of speaking in his interviews. We’ve always loved to stay in a cocoon and it isn’t the fault of any party or ideology. It is actually the basic human psychology of staying inside a safe and comfortable zone for the sake of survival. In this whole process of survival, we actually tend to forget the meaning of our existence. History should disturb us. But more than that, it should enlighten us without diminishing anyone. Vikram Sampath has not tried to diminish anyone even when he spoke about two individuals who are polar opposites of each other. It shows the compassion that exists in him.

We’re countering extremism with extremism, and if we talk of these things, we’re called as dreamers of a Utopian society. But I guess that dream keeps us alive. I never eulogize a writer like I do for Vikram Sampath and it is not because he penned history for the sake of history, but because he kept love and compassion above the historical documents and artifacts. Love for the society. Love for humanity. Compassion for an individual who is hated by some who know almost nothing of him, and eulogized by others to an extent even he’d have denied. I can keep on writing but I would just say that I love the historian for what he is doing, and I would like to thank him for being the historian I have been looking for so long!