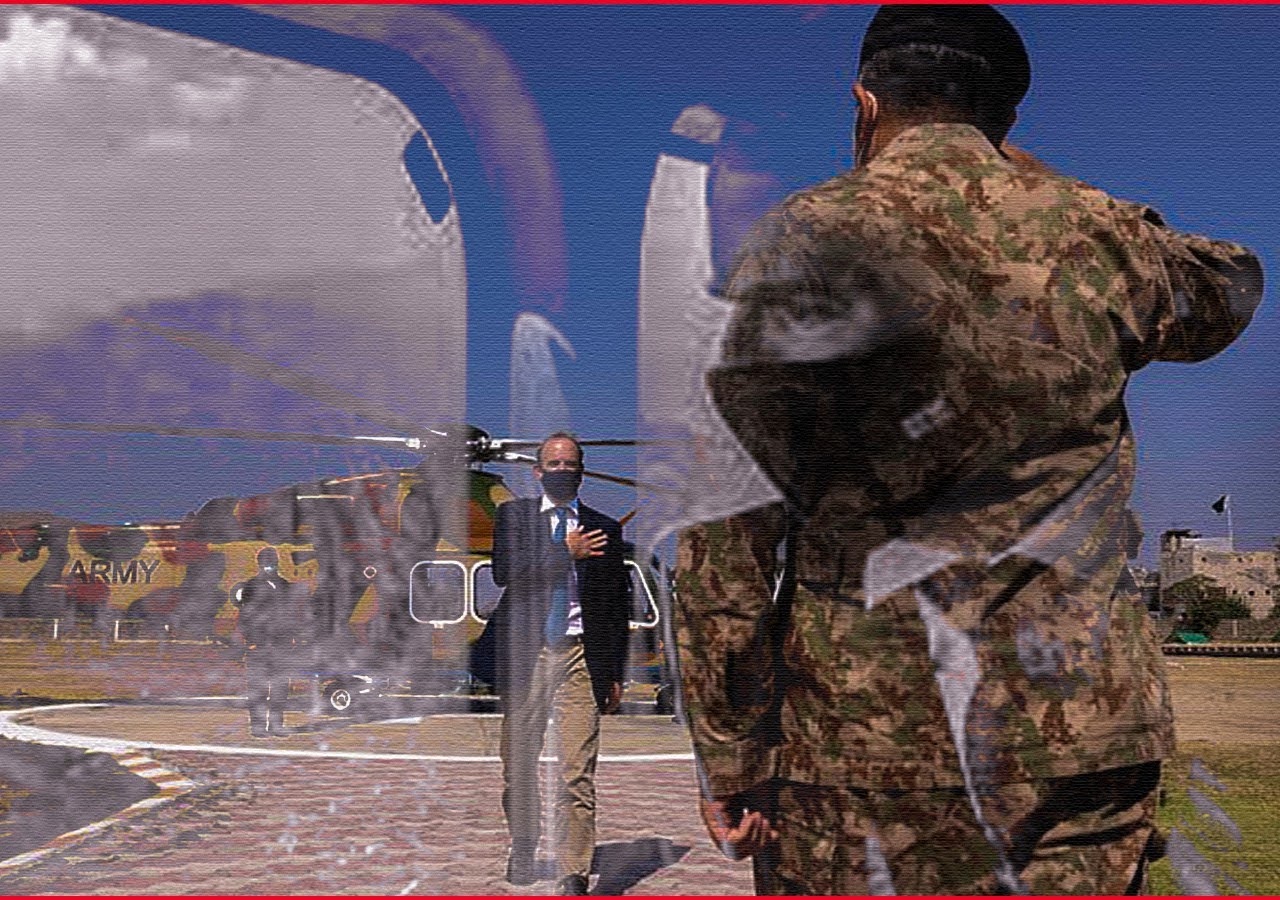 A few weeks ago, British foreign secretary Dominic Raab visited Pakistan for the first time after the mismanaged withdrawal of troops and civilians from neighbouring Afghanistan in August.

Raab called Pakistan a “vital partner” as he sought with his Pakistani counterpart to “prevent Afghanistan becoming a hub for terrorist outfits.”

The British Foreign Office, Ministry of Defence and intelligence services are certainly aware of the fact that Pakistan has been the leading external backer of the Taliban for several decades.

Former MI6 chief Sir Richard Dearlove has even assertedthat the terrorist group could not have completed its takeover of Afghanistan “without Pakistani backing”.

Pakistan’s support for extremist forces has long been openly acknowledged by US officials. In 2020, the US State Department stated that “Pakistan continued to serve as a safe haven for certain regionally-focused terrorist groups” and “allowed groups targeting Afghanistan, including the Afghan Taliban…to operate from its territory.”

Talibani terrorists who were wounded have been known to receive treatment in Pakistani hospitals. According to a report based on interviews with field commanders of Taliban in Afghanistan, the Inter-Services Intelligence (ISI) of Pakistan was giving “very significant” amount of funding, training and sanctuary to the Taliban.

The 2020 research, by the London School of Economics, discovered that ISI agents even attend the supreme council meetings of Taliban. ISI chief Lieutenant General Faiz Hameed visited Kabul a few weeks back in order to talk with Taliban leaders.

The UK has aided the security establishment of Pakistan despite Islamabad’s covert support for Taliban operations against UK troops in Afghanistan.

MI5 and MI6 have been training Pakistan’s senior intelligence officers at an annual UK military training course at Chicksands, a British army intelligence base in Bedfordshire, north of London.

The training course includes lectures delivered by the UK Defence Intelligence chief and deputy chief, along with modules on “security policy” and the “challenges of intelligence sharing”.

Its main objective is to “discuss and analyse the conduct and management of intelligence” as well as “forge personal and professional relationships”. The UK Ministry of Defence (MOD) has said that the course “provides a significant opportunity for intelligence diplomacy at the highest levels”.

Little information concerning the UK’s intelligence relations with the ISI has been made public, despite ISI allegations of collusion over the maltreatment of Al Qaeda suspects. In 2009,the foreign affairs committee of UK Parliament said that it was “very concerned by allegations that the nature of the relationship that UK officials have with the ISI may have led them to be complicit in torture.”

In 2018, when the UK government was asked in parliament whether it considered ISI’s support to the Taliban when providing assitance to Pakistan, it simply replied: “It is the long-standing policy of the government not to comment on matters relating to intelligence or national security”.

British military training of Pakistan, however, has been ongoing with courses in the UK having been given for years. In 2019-20, Pakistani personnel took part in no less than 27 UK military courses provided by the British Army, Navy and Royal Air Force.

The previous year, Pakistani personnel took part in 30 UK military courses in Britain with “bespoke” training offered. The UK stations nearly 10 military personnel in Pakistan, where roles have included teaching pilots at the air force academy in Risalpur, near Peshawar.

There have been ongoing high-level relations between senior executives. In 2016, the then British Army chief, General Sir Nicholas Carter, visited Pakistan “in order to reinforce the close military relationship” between both the nations.

It was Carter’s fourth meeting with Pakistan’s Chief of Army Staff, General Raheel Sharif, in the last two years. Carter “spoke of his deep respect for the Pakistan Army’s achievements in combating terrorism”.

The next year, General Carter delivered a speech at the President’s Parade in Pakistan in which he said “our two Armies have a long and resilient relationship built on mutual respect and understanding”.

Carter, now defence staff chief, visited Pakistan again in October 2020 when he “highlighted the close UK-Pakistan defence partnership” in a speech to the National Defence University.

The militaries of both the countries engage in annual talks among the army, air force and navy and the MOD holds an annual Defence Cooperation Forum attended by the permanent secretary of the defence ministry.

Pakistan is also a major market for British weaponry exports. Pakistan received £267 million in military or “dual-use” equipment from the UK in the ten years leading up to January 2021. Components for military helicopters, weapon sights, and small weapons ammunition were among the most often issued licences.

Joe Glenton, a former soldier who fought in Afghanistan said: “there has been very little critical scrutiny over the years of how the intelligence services of Pakistan were provisioning the same extremist groups who were returning young British soldiers home with missing limbs or dead.”

This kind of detail, which is important to even a basic comprehension of the war, has generally been overlooked in favour of that very British brand of imperial fantasia that has characterised the entire two-decade-long debacle, he added

He further stated that soldiers, veterans and the bereaved families of the ones who were killed and wounded, should be extremely angry and that they should be demanding answers.

UK ambassador to Afghanistan from 2007-2009, Sir Sherard Cowper-Coles, in his memoir, wrote that during his meetings with the then Afghan president Hamid Karzai “one subject always came up”: Pakistan. “Like many of his fellow countrymen, Karzai was convinced that the source of many or most of his country’s troubles was Pakistan in general, and the Inter-Services Intelligence directorate (ISI) in particular,” Cowper-Coles wrote.

Karzai “believed that Pakistan had never accepted the removal of the Taliban – Pakistan’s proxies – from power” and that “worse than this, he believed that Britain was in league with Pakistan”, Cowper-Coles observed.

He added: “Time and again [Karzai] accused me of being too sympathetic to Pakistan, and of working for a government that was colluding secretly with Pakistan to control Afghanistan.”

Karzai was convinced that MI6 had close relations with Pakistan and operated in Afghanistan on behalf of Pakistan.

In the 1980s, Pakistan served as a staging area for the mujahideen assembled by the CIA, MI6 and Pakistan’s ISI as part of ‘Operation Cyclone’ in order to combat the Soviet-backed government in Kabul. Mullah Omar, the founder of Taliban, was one of those taught by the ISI during this time.

The Brookings Institution notes: “As (Omar) created the Taliban, the Pakistani army gave him support for the drive on Kabul in 1996 that gave the Taliban control of most of the country. Pakistan provided experts and advisers for the Taliban military, oil for its economy and was their supply route to the outside world.”

The Taliban seized control of Kabul in 1996 and reigned until the US and UK invaded in October 2001, ostensibly to apprehend Osama bin Laden, the mastermind of the 9/11 attacks in New York and Washington.

According to a 2001 report by Human Rights Watch, Pakistan was then “soliciting funding for the Taliban, bankrolling Taliban operations, providing diplomatic support as the Taliban’s virtual emissaries abroad, arranging training for Taliban fighters, recruiting skilled and unskilled manpower to serve in Taliban armies, planning and directing offensives, providing and facilitating shipments of ammunition and fuel, and on several occasions apparently directly providing combat support.”

Pakistani support for the terrorist group did not wane after the US and British invasion had overthrown its regime and the movement turned to violent insurgency against Western forces in the country.

In 2007, the New York Times reported from Quetta, a Pakistani city alongside Afghan border, that it was “an important base for the Taliban” and that “Pakistani authorities are encouraging the insurgents, if not sponsoring them.”

A Western diplomat in Kabul said that “the Pakistanis are actively supporting the Taliban”, while adding that he had seen an intelligence report of a recent meeting on the Afghan border between a senior Taliban head and a retired ISI colonel.

Islamabad’s policymakers have sought to exercise influence over Afghanistan and counter Indian dominance in the area.

Islamabad’s remained a strong supporter in later years of the Afghan conflict. WikiLeaks documents from 2010 revealed that Pakistan’s ISI was holding secret strategy sessions with the Taliban to plan the fight against American soldiers.

The New York Times wrote that the “ISI directly helped organise Taliban offensives at key junctures of the war”. Behind the scenes, officials in both Bush and Obama administration and US commanders have reportedly confronted senior Pakistani military officers accusing ISI complicity in attacks in Afghanistan, and even presented Pakistani officials with lists of ISI and military operatives who were suspected to be working with militants.

In 2011, Admiral Michael Mullen, the Chairman of the Joint Chiefs of Staff, UK, said that the terrorist organisation was operating from Pakistan “with impunity” and that “extremist outfits serving as proxies of the government of Pakistan are attacking Afghan troops and civilians as well as US soldiers.”

A year after the accusation made by Mullen, as UK Prime Minister David Cameron visited Pakistan, the UK government said that the two countries had “an unbreakable partnership”. UK troops were still under attack from the Taliban and more than 400 had died by then.

Cameron then established an “enhanced strategic dialogue” that would include an annual summit where the countries would address problems such as security, trade, and education.

It is unclear what has been accomplished if the UK’s support for Pakistan’s security apparatus was meant to persuade it to cease its support for the Taliban. Rather than criticising Pakistan for supporting the Taliban in public, UK policymakers have long argued that Islamabad is committed to regional stability.

In 2019, the UK government stated that “The UK recognises the critical role Pakistan has to play in facilitating stability in the region, and in enabling the conditions for meaningful peace talks between Afghanistan and the Taliban. This is one of the many reasons that the UK continues to invest in the close Defence relationship with Pakistan.”

The UK has offered some assistance to Pakistan to combat terrorism on its soil. In 2011, an elite team of around 20 British military trainers was stationed in Quetta “to train front line forces in the struggle against al Qaeda and the Taliban”.

However, the team was expelled from the country by the government of Pakistan after the US assassination of Osama Bin Laden in Abbottabad, Pakistan.

Patrick Sanders, a senior UK military commander, said in 2017 that “Pakistan has made breathtaking gains against militants in Tribal areas, unmatched in over 150 years, and deserves credit for that.” He added: “Our relationship is very close and the role the Pakistan army plays is very important in the region.”

In March this year, Sanders visited Pakistan again to meet Chief of Army Staff, Pakistan, General Qamar Javed Bajwa and said he “acknowledged and appreciated” the efforts made by Pakistan army in the fight against terrorism.

Close ties between London and Islamabad have continued, even as Pakistan’s backing for terrorist groups has gone beyond the Taliban. Few weeks back, Lt. Gen HR McMaster, the former US National Security Adviser, asserted that Pakistan should be labelled and treated as a “pariah state” if it did not stop supporting jihadi groups.

“We have to stop pretending that Pakistan is a partner,” he said. “Pakistan has been acting as an enemy nation against us by organising, training and equipping these forces and by continuing to use jihadist terrorist organisations as an arm of their foreign policy.”