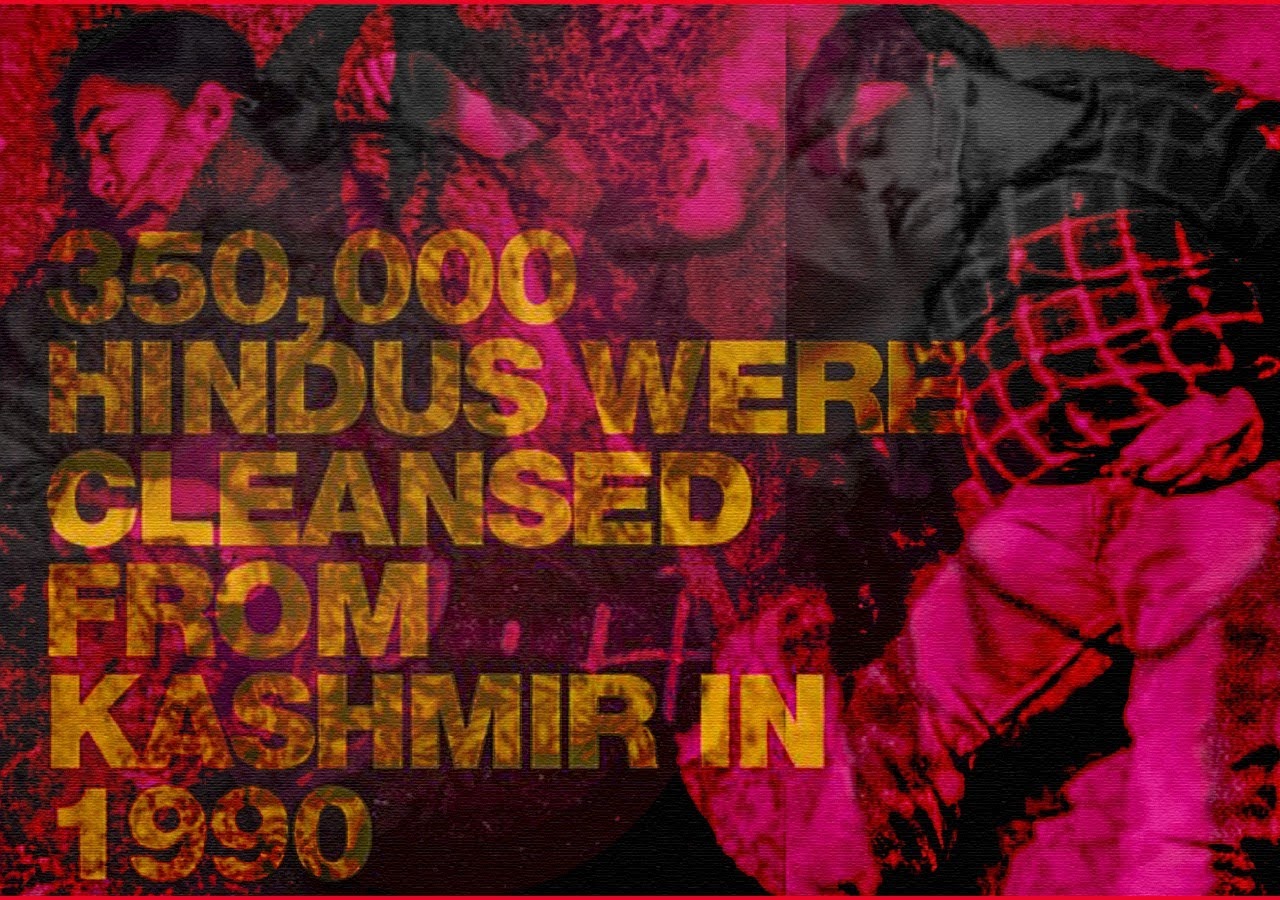 It was the 19th of January, 1990. There was no Twitter back then. There isn’t a single private satellite news channel broadcasting 24 hours a day, seven days a week. The news was frequently received several days later. Mosques in Kashmir shouted chants on their loudspeakers that night, urging Kashmiri Pandit men to leave the Valley and their women behind. On the streets of Kashmir, Islamists supported by Pakistan yelled Azaadi chants. The system had come to an end.

As a result of the turmoil, famous Kashmiri Pandits were targeted for assassination. The Jammu Kashmir Liberation Front (JKLF) has claimed responsibility for the majority Pandits’ deaths, from political figures like Tika Lal Taploo to judges like Neelkanth Ganjoo, from Doordarshan’s Lassa Kaul to scholar writer Sarwanand Kaul Premi. Terrorists such as Yasin Malik and Bitta Karate were viewed as the major perpetrators of the Kashmiri Pandit exodus.

The JKLF even killed four unarmed Indian Air Force soldiers and kidnapped the daughter of India’s then-Home Minister Mufti Mohammad Sayeed. No JKLF terrorist has ever been convicted of these terror acts. Atal Bihari Vajpayee and Manmohan Singh, on the other hand, welcomed and entertained terrorist Yasin Malik on several occasions.

Since 1990, around 400,000 Kashmiri Hindus have been forced to flee their homes. My mother and grandmother drove me to Jammu in a cab on January 20, 1990, leaving our ancestral home in Rainawari, Srinagar, behind, never to return.

Three decades later, the Kashmir valley is once again filled with an unsettling stillness. In Kashmir, Harud, or autumn, has arrived. The collapsed Chinar lies motionless in the streets. In particular, Srinagar is deafeningly silent, as though in sorrow. The markets closed many hours ahead of schedule. There is a sense of dread at the prospect of the unknown. Even before it becomes dark, Lal Chowk and its neighbouring upscale marketplaces are closed. As a precaution, the minority community’s sweet shop proprietors and fruit vendors have been ordered to come home early.

Five people have been killed in the Kashmir valley in less than three days, the majority of them are from minority populations. To send a message, Islamist militants hiding in Srinagar are targeting soft targets. In Kashmir, the message is to destabilise India and its minorities. Those who symbolise Indian democracy and proudly display the Tricolour in Kashmir are the targets.

Makhan Lal Bindroo, 68, was slain at his pharmacy store in Iqbal Park, which is less than 500 metres from the Srinagar SSP office. He had never left the Valley, even during the height of terrorism. Bindroo, who was well-liked by the community, went out of his way to help those in need. What was this man’s crime, if he was simply trying to aid the Kashmiri Muslim population?

Birender Paswan, a Bihari street vendor, was also fired killed from behind by terrorists in Srinagar’s Lal Bazar neighbourhood. It was the first day of his fasting for the Hindu festival of Navratri. He had called his wife in Bhagalpur, Bihar, earlier in the day to tell her of his planned trip home. He had been looking forward to meeting his five-year-old daughter. That evening, while pushing his cart, he was shot from behind by a terrorist. A day later, ISIS published an 18-second video footage of the murder.

Supinder Kour and Deepak Chand, respectively, were the principal and teacher of a government school in Srinagar’s Eidgah neighbourhood. They were in school on Thursday morning, just like the other teachers. When terrorists barged into the school grounds and paraded the teachers, it was just like any other day. Teachers were required to present their identity cards as well as their cell phones. All Muslim professors were permitted to depart after a brief questioning. Deepak Chand was removed from the picture. Supinder raced to save Deepak Chand as the terrorists loaded their guns to fire bullets into him. She criticised the terrorists’ choice, telling them to fear the Almighty. Terrorists fired shots into both, but they were able to run.

Supinder Kour was a humanitarian who was assisting and paying for the education of an orphaned Kashmiri Muslim girl. Kour was also assisting with the medical bills of a Kashmiri Muslim security guard at the school where she worked. What was her crime if she was brutally murdered outside her school?

In the valley, daily violence and events such as assaults on Kashmiri Hindus have increased. According to sources, one of the causes for the increase in such events might be the government’s huge anti-encroachment campaign, which aims to maintain and defend Kashmiri Pandits’ immovable assets from encroachers and interlopers.

According to the report, thousands of ancestral properties of Kashmiri Hindu migrants who had to flee Kashmir due to Islamic terrorist violence targeted against them in a planned exodus have been illegally occupied by Muslims in the region have been returned to their rightful and original owners in the last few months. According to the study, this might be one of the main reasons for the valley’s targeted attacks against Hindus.

The administration of Jammu and Kashmir set a key milestone in August when it launched an online grievance redressal portal, where Kashmiri Hindus could submit whatever concerns they had about their properties in Kashmir.

Property-related concerns are being filed on this platform by Kashmiri Pandits all throughout the country. In situations of encroachment, the J&K administration initiates eviction procedures as soon as the complaint is received.

The administration has received thousands of complaints using this platform thus far. More than 1000 of these complaints have resulted in action. According to the study, the Anantnag district in Kashmir has received the most complaints of unlawful encroachment, trespassing, and land grabbing.

“From last more than ten days there is an input that the businessmen and prominent faces from Non-Migrant Kashmiri Pandits/Hindus living in Kashmir Valley will be eliminated from Kashmir Valley and concerned agencies are in deep slumber and reason to which one more killing of the leading businessman wil be carried out,” the Kashmiri Pandit Sangarsh Samiti, a body of Pandits who have chosen to stay in the Valley for the last three decades, said in a stinging letter to the Lt Governor Manoj Sinha.

“That the callous approach taken by your good self’s office and security agencies working in Kashmir Valley has raised doubts about the current government’s intentions regarding the security of non-migrant Kashmiri Pandits/Hindus living in Kashmir Valley,” they continue.

“On the one hand, our requests for meetings to discuss these issues are ignored, while on the other hand, your Excellency’s office and security agencies’ failure to protect the lives and property of minorities living in Kashmir Valley clearly demonstrates the administration’s collapse and lack of coordination,” the letter continues.

In today’s Valley, Kashmiri Pandits are sitting ducks. The government has failed to secure them protection even 32 years after their horrific flight and ethnic cleansing. When the surviving Hindus and Sikhs in the Valley no longer feel safe, how would Lt Governor Manoj Sinha assure Pandits’ rehabilitation?

The Kashmiri society’s silence over the terror deaths is shocking. The “collective silence is baffling but not at all surprising,” says Rahul Pandita, Kashmiri Pandit author of Our Moon Has Blood Clots. You may get golgappa anyplace in India, even Pandara Road in New Delhi, but a Bihari who comes to Kashmir to sell golgappas becomes an alien.”

The hypocrisy of Kashmiri society may be seen in its failure to condemn Islamist militants. The casualties include not just Kashmiri Hindus and Sikhs, but even ordinary Kashmiri Muslims who identify as Indians. This duplicity is sometimes hidden beneath the phrase Kashmiriyat. The term Kashmiriyat is a misnomer. Kashmiriyat is a term invented to create a false sense of unity in order to conceal Islamist extreme ideology and violence against Kashmiri Hindus and Sikhs. Kashmiriyat is only apparent during Hindu and Sikh funerals for media PR stunts. Non-Muslims are still being targeted now, as they have been for the past three decades.

Today, Kashmiri Pandits desire to inform the nation that they and their families may be slaughtered tomorrow. For Hindus and Sikhs in Naya Kashmir, the fall of 2021 has brought the frost of the winter of 1990. Groups protesting against the killings in Kashmir have directly requested the Prime Minister Narendra Modi to not allow another exodus to occur while he is in office.