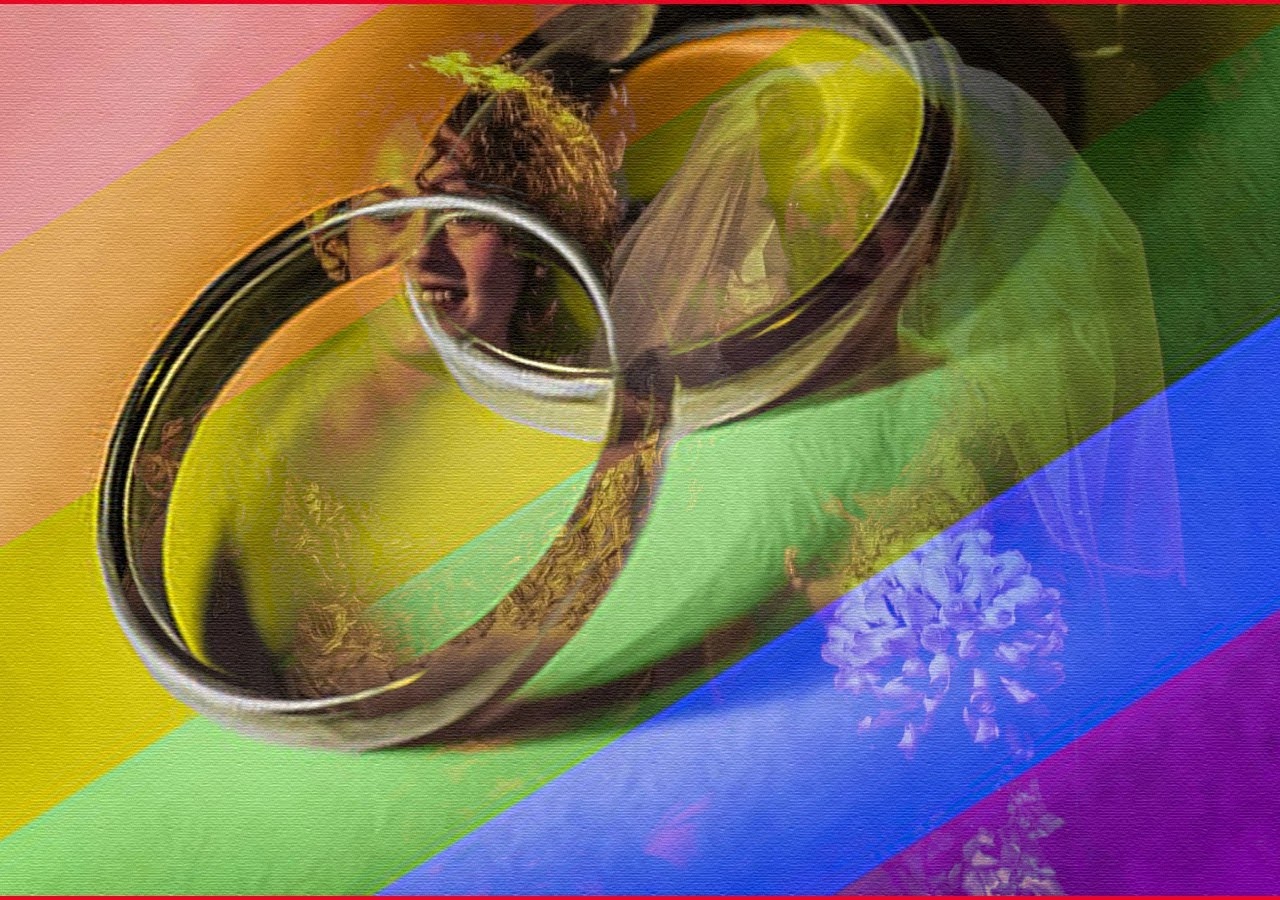 Swiss voters overwhelmingly supported same-sex marriage in a referendum on Sunday (26 September 2021), according to official data.

As per the Federal Office of Statistics, “Marriage for All” was approved with 64.1% of the vote, with none of Switzerland’s 26 cantons voting against it.

Swiss Justice Minister Karin Keller-Sutter expressed that the federal government “welcomes this decision because the state should not dictate how people should organise their private life.”

“The Federal Council will quickly implement the will of the people,” she further said. “According to current planning, the new provisions can come into force on July 1, 2022 – same-sex couples will probably be able to get married in Switzerland from this point in time.”

Married women couples, she highlighted, should then be able to “make use of the legally regulated sperm donation”.

The outcome was broadly in line with polls issued in the lead-up to the ballot, which showed that 63% of voters in the wealthy Alpine country would support reform.

Switzerland is one of the few Western European countries where it is still illegal. Same-sex marriage was legalised in Europe for the first time in the Netherlands 20 years ago.

However, the campaign in Switzerland, which put LGBT campaigners against conservative opponents, was extremely polarised.

“When you’re favourite to win, the danger is that people in favour of the reform demobilise and suddenly, it is the opposing camp that wins. That’s why despite the overwhelmingly positive polls, we are redoubling our efforts to really make sure all the people with the right to vote use it,” said Olga Baranova, manager of the “Marriage For All” campaign.

Prior to the referendum, Thierry Delessert, a historian at the University of Lausanne who specialises on problems relating to LGBT in Switzerland, stated that a yes vote would be “hugely significant.”

“Until the early 2020s, what dominated was a discourse of differentiated equality,” the expert told Euronews. “But marriage means full equality, with LGBT people recognised as citizens on a par with other citizens — not just equal with fewer or particular rights.”

Opponents, meanwhile, are concerned that the bill will damage traditional family values.

“Marriage and family are closely linked because children are born naturally only from the union of a man and a woman,” says the interparty committee “No to marriage for all.”

What will the reform entail?

Since 2007, same-sex couples in Switzerland have been able to get formal approval for civil unions, which are not comparable to marriages.

However, as a result of the ‘yes’ vote, now couples will soon be able to marry and adopt children.

If lesbian couples wish to start a family, they will have greater access to sperm donors. Anonymous sperm donation, egg donation, and surrogacy, on the other hand, will remain illegal.

Foreign partners will also find it easier to obtain Swiss citizenship under the new rules.

Why was there a referendum?

The reform had been debated for years. It was first proposed by the Liberal Greens in the year 2013 and Swiss parliamentarians adopted it last December.

Conservative parties, however, indicated immediately that they would contest the bill in a referendum, relying on the country’s direct democracy structure.

Under the Swiss Constitution, any parliamentary decision can be submitted to a referendum if at least 50,000 citizens sign in support of it.

The Democratic Federal Union (UDF), a minor evangelical party, proposed the referendum on same-sex marriage, with the support of the Democratic Union of the Centre (UDC), a populist party in the government coalition, and a Christian-democratic party (Le Centre).

“These are the same groups expressing themselves as elsewhere in Europe,” said Delessert, citing “Christian conservatives” and “nationalists”.

“The main difference is that in Switzerland, with referendums, it is the fifth time that the population is consulted on LGBT issues. No other (Western) European LGBT community has had to face the population’s opinion on its legitimacy, on its right to exist,” the historian stated.

“Opponents of LGBT rights have launched a referendum each time and they have lost it each time,”he stated.

Switzerland’s same-sex marriage referendum: what are the arguments for and against?

The bill’s supporters, which include the government and parliament, argue that it is necessary to remove disparities in treatment between same-sex and opposite-sex couples.

“We are leading this fight for two reasons. First, because civil marriage for all is self-evident,” said Baranova.

“Switzerland is the penultimate country in Western Europe which does not yet allow same-sex marriage. So every other European country has had it for years, and for a very simple reason: there are no valid motives to deny marriage and all the rights inherent in marriage to same-sex couples,” the campaigner stated.

“And the second reason is that today, in Switzerland like everywhere else, you have children who grow up in families called rainbow families, so families where at least one parent doesn’t define as heterosexual. These children today do not enjoy the same legal protection as children who grow up in heterosexual families. And that, in fact, is discrimination against these children. These children are legally less well protected. So beyond the symbolic power of marriage for all, it is a legal necessity to protect families and children,” Baranova went on.

Opponents of the legalisation, on the other hand, contend that they are safeguarding family values.

According to Marc Früh, an author, educator and member of the committee named “No to marriage for all”, marriage should be reserved for a man and a woman together only. “The term marriage, even before Plato, clearly refers to a man and a woman transmitting life,” he said.

He emphasised, based on his experience as a teacher, that children require both a father and a mother.

“We simply can’t erase fathers from the Civil Code, as that is one of the issues,”Früh told the media, underlining that under the proposed marriage reform, the word “father” will be replaced by “the other parent.”

“The mother would always be the first parent,” he went on, “and I do not accept that the father becomes a secondary parent. That’s a no.”

Baranova stated that the campaign was “very violent” for LGBTs. “The homophobia that exists in society has come to light,” she said.

Among several other examples, Baravonastated that their posters were “torn up, tagged, burned in a way I have never seen in Switzerland”.

“I’ve been in politics in Switzerland for twelve years. Never have I seen such violence also in large urban centres, where one might think that homophobia has declined enormously.”

She went on to say that during the referendum campaign, the number of people calling hotlines to help victims of homophobia had increased dramatically. “Before these hotlines received one or two calls per week but at the peak of our campaign, these hotlines started to receive 1 or 2 calls per day,” Baranova went on.

“After this campaign, no one will be able to say that homophobia no longer exists in Switzerland,” the campaigner told the media.

“In Switzerland, violence is sneaky, it is verbal and consensual,” said Delessert.

“It is conveyed, for instance, through horrendous posters such as one featuring a zombie above a child to show the infant will never have a daddy,” the historian said.

“But here in Switzerland, apart from the very surprising COVID protests, demonstrations are not a common way of fighting authorities. In Switzerland, anti-law referendums are the way to fight authorities,” the historian explained.

On same-sex marriage, how does the country compare with the rest of Europe?

In Western Europe, Italy is the only other large country where same-sex marriage is illegal, even though civil unions were adopted in the year 2016.

Germany and Austria were the most recent Western European countries to legalise same-sex marriage, in 2017 and 2019, respectively. This, according to Delessert, had a significant impact on Switzerland, where German speakers constitute the majority of the multilingual country’s population (around 70%).

Across Eastern Europe, there is strong opposition to gay marriage. It is constitutionally prohibited in numerous nations, including Poland and Hungary. Civil unions are permitted in Estonia, and same-sex relationships are recognised in the Czech Republic and Hungary.

When asked why Switzerland was accepting marriage equality much later than other Western European countries, both Delessert and Baranova cited Switzerland’s lengthy legislative processes.

“There is always the possibility of a popular veto and that’s why such important projects take so much time. Lawmakers will seek to cement their proposals so that they do not fail at the polls and obtain a majority in Parliament – because in Switzerland, parliamentary majorities are renegotiated for each subject,” Baranova explained.

According to Delessert, Swiss society is often evolving faster than the country’s legislation.

“In Switzerland, when it comes to morals, laws come to endorse a social reality that is already well established,” Delessert said, referring to the country’s culture of “mandatory consensus”.

The historian said that he met numerous fellow Swiss citizens who were startled to learn that same-sex marriage was not already legal in their country. “They thought the matter was already settled, that there was no problem,”Delessert told Euronews.

What is the current situation of LGBT rights in Switzerland?

At present, Switzerland now ranks 23rd out of 48 European countries in terms of respect for LGBTI rights, according to ILGA-Europe.

Although homosexuality was decriminalised in the country in 1942, authorities in several cantons kept a registry of gay persons until the early 1990s.

Overall, Baradova described the current state of the LGBT community in Switzerland as “mixed”.

“There has been a lot of progress over the last 20 or 30 years. Many laws have been adopted,” she said.

Last year, gay discrimination became a serious criminal offence on an equal footing with racist discrimination, a development which Baradova described as “a great step forward”.

“There has been more awareness and acceptance in society but at the same time, we continue to have hate crimes. There is also a lack of prevention, typically, everything related to schools education, awareness-raising, etc.” the activist told media.

The Story of Tipu Sultan and The Kodavas Who Defeated Him For At Least Thirty Times.

The Actual Story Of Rama, Ahalya And Gautama.