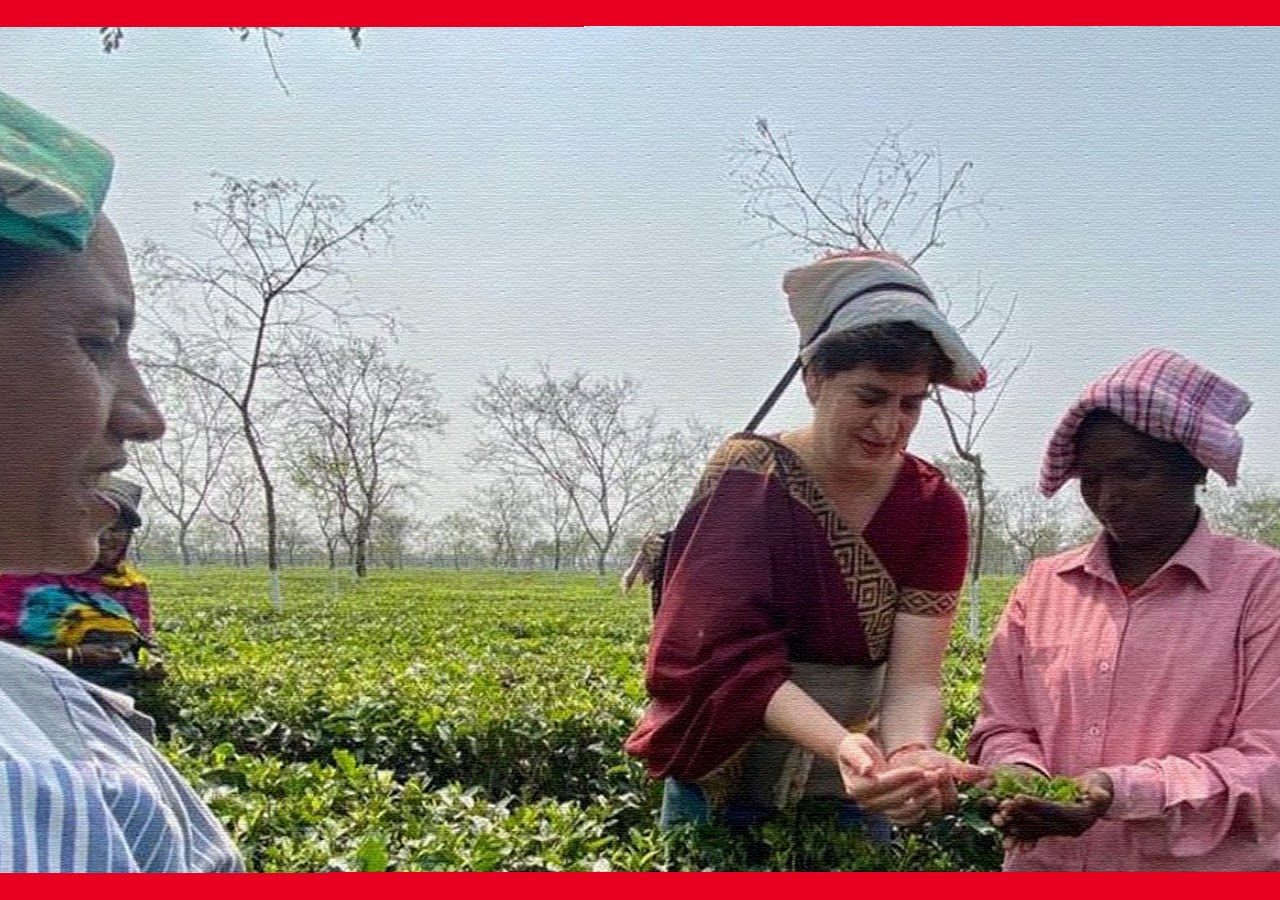 For the 2021 state elections, Assam was seen as one of the strongest fortresses of the BJP. It was widely speculated that compared to states like Bengal, Punjab or Tamil Nadu, it would be relatively easy for the BJP to secure victory in Assam. However, now, with the election days away, new assumptions are growing over a possible comeback by Congress.

A number of factors have lately emerged in the electoral scenario of the state that is pointing towards a possible fightback by Congress.

The fact that Congress is planning to make the election more difficult than what the BJP and its supporters had planned for is evident from the fact that Priyanka Gandhi Vadra, the Congress general secretary in-charge of Uttar Pradesh, has chosen Assam as her first major campaign trail outside of UP.

Priyanka arrived in Assam on 1st March and after praying at the Kamakhya Temple she reached Upper Assam which is considered a strong area for the BJP.

This visit by Priyanka Gandhi is but a small part of a more aggressive approach that Congress is planning to take in Assam. The party is forming crucial alliances such as that with BPF and leading a strong campaign against the BJP in Assam. For the upcoming election, Congress is focusing on key issues such as unemployment, inflation and most importantly the Citizenship Amendment Act.

This aggressive approach from Congress seems to have made the NDA somewhat uneasy. This unease is very much visible in a number of steps that the BJP has recently taken. Be it state BJP chief Ranjit Das considering shifting from his seat Sorbhog, the sudden increase in visits by Home Minister Amit Shah and PM Narendra Modi or the attack by BJP workers on the convoy of Assam Jatiya Parishad chief Lurinjyoti Gogoi in Nalbari.

The Question of CAA

Reaching Assam on 1st March (Monday), Congress leader Priyanka Gandhi Vadra launched an attack on the BJP saying that the BJP did not have the courage to talk about the hugely controversial citizenship law in Assam, ahead of Assembly elections in the state.

Speaking with reporters  in upper Assam’s Biswanath district, Ms. Gandhi said, “They talk about CAA (Citizenship Amendment Act) all over the country but, when they come to Assam, they don’t have the courage to talk about it.”

The Citizenship Amendment Act (CAA) that was passed in December 2019 triggered massive waves of chaos and violent protests across the country and Assam was the state where this chain of nationwide protests had first gained momentum. In Assam, five people died and dozens were injured in violent anti-CAA protests across both Brahmaputra and Barak Valley. These protest resulted in curfew in Guwahati and suspension of internet services in several districts of the state.

The BJP argues that it will help non-Muslim refugees from three neighbouring Muslim majority countries become Indian citizens if they fled to India because of religious persecution. However, the opposition says CAA will violate secular tenets of the Constitution and discriminates against Muslims.

A large section of people of Assam was especially dissatisfied with the act since the state already shares a porous border with Bangladesh and had already accepted refugees till 1971. People of Assam feared that CAA would mean loss of culture and jobs.

Speaking at a public event in Bengal, Union Home Minister Amit Shah, repeatedly mentioned that measures to implement the CAA would be drafted after the coronavirus vaccination drive – which began on 16th January in done with.

However, both Amit Shah and Prime Minister Narendra Modi did not make any statement on the implementation of CAA even though they have visited the state multiple times in the last few months.

Meanwhile, speaking on the issue of CAA, during her Assam visit, Priyanka Gandhi Vadra said, “Assam’s people are smart and they see through the lies. I believe they will vote for those who will uplift this place’s identify and tradition.”

The first major key decision that might contribute to a possible comeback by the Congress in Assam is its alliance with Badruddin Ajmal‘s All India United Democratic Front (AIUDF).

Initially, some Congress leaders were not in favour of the alliance and they argued that such an alliance could spark a polarisation of Hindus towards the BJP and would renew Ajmal’s political fortune which was on the decline after his party’s poor performance in the 2019 Lok Sabha elections.

However, after some debate and discussions, Congress managed to arrive at a mutual agreement and decided to ally with the AIUDF. This alliance may prove highly crucial since, in 2016, both Congress and the AIUDF had lost around 14 seats because of a division of votes between them.

Congress alliance with the AIUDF has also broadened the conditions for a possible unification of Muslim votes that makes up to as much as 34 per cent in Assam and has a strong foothold in Lower Assam and Barak Valley.

Congress leaders have also privately admitted the fact that AIUDF supremo, Ajmal has proven to be a very satisfactory ally to deal with since he is not afraid to compromise his own interests for the sake of the alliance.

The second big development in this political scenario took place on 28th February when taking a massive move Bodoland People’s Front (BPF) announced to join the UPA Mahajot. This was a huge blow for the BJP as BPF had been a BJP ally for the last five years.

Speaking on BPF’s alliance with the INC, Congress spokesperson Konwar said, “The BPF is our old friend. They hold a large influence in the BTR region. Even by conservative estimates, they will definitely win 6-7 seats and then be a very decisive factor in 18 more seats where there are a considerable number of Bodo voters. The BPF joining our grand alliance is very good news for us.”

The conflict between the BJP and the BPF started in December last year when the latest elections to the BTC were held. In the election, out of the 40 elected seats in BTC, BPF won 17 seats, UPPL won 12, BJP nine, GSP one, Congress one seat.

However, to BPF’s surprise, BJP did not ally with them to rule the BTC, instead, it joined hands with the UPPL and GSP. This clearly indicated a major fracture in the BJP-BPF alliance in the state elections.

The election in BTC was preceded by the Centre’s signing of the accord with Bodo groups in January last year. Promod Boro, a former president of All Bodo Students’ Union who is currently leading the UPPL, was one of the signatories of the accord.

After the election results, Mohilary was extremely unhappy. Accusing violation of constitutional provisions, he approached the Gauhati High Court.  Responding to his appeal, the High Court ordered a floor test for the ruling alliance of the BJP-UPPL-GSP to prove their strength.

A number of speculations have been made as to why the BJP decided to part ways with Hagrama Mohilary’s BPF. Speaking with the Indian Express, senior BJP leaders have said that Mohilary has made statements such as the polls were a contest between “Himanta Biswa Sarma and myself.” Mohilary has also made a media statement saying that once he had said Sarbananda Sonowal should become the next CM of Assam, and Himanta Biswa Sarma was offended by it.

Meanwhile, in a statement on Sunday, the BJP said that they were aware of a secret understanding between the BPF and the Congress-AIUDF for a long time. The official announcement of the alliances has only confirmed their long-standing doubt.

The BJP statement said, “Just like the Congress has proven itself to be anti-indigenous people of Assam by allying with the AIUDF, similarly, the BPF has besmirched the history of Bodo people’s struggle by joining the grand alliance.”

The roots of BPF lie in the long history of insurgency of Bodoland and its demand for a separate state. Till now, three peace and development accords have been signed in 1993, 2003 and the last one in January 2020 among the Central government, state government and the Bodo outfits.

Under the 2003 accord, the BTC was formed. Since then, elections have been held in 2005, 2010, and 2015. Notably, BTC is an autonomous, self-governing body under the Sixth Schedule of the Indian Constitution.

In BTC Council polls, the BPF swept to power. It was previously called the Bodo People’s Progressive Front and most of its members are made up of a large section of surrendered militants of the Bodo Liberation Tigers (BLT) who gave up arms after the 2003 accord. The BPF is currently led by the powerful Bodo leader Hagrama Mohilary. Mohilary is himself a former BLT chief who surrendered in 2003.

The region is significant in deciding the course of the election as it has nearly 15 Assembly seats. Significantly, Bodos are the single-largest tribal community in Assam and constitute over 5-6 per cent of the total state population.

In the 2006 and 2011 election, the BPF was in alliance with the Congress-led government in Assam. It parted ways during the 2014 elections. In the 2016 Assam polls, the BPF won 12 seats out of the 13 it contested and allied with the BJP to form the state government.

Speaking with the Indian Express last week, BPF general secretary PrabinBoro said, “We will certainly contest and win the 12 seats we have. In addition to that, we will see where else to contest.”

The Question of Congress’ Victory

If we look at the C-Voter survey, the Congress and its allies the AIUDF, BPF, Left Parties and Anchalik Gana Morcha have worked enough to put themselves in a position of 50-55 seat range. However, it is still far from the majority mark of 64. This means, to win a majority, Congress would still need at least 15-20 more seats. Otherwise, Congress may need to depend on an unpredictable ally such as the BPF.

Though the Mahajot may help Congress get past the 50 seat mark, it may not help them in forming the government. To do that, Congress have to make further efforts to impress the BJP-learning communities such as tea tribes and caste Hindu Assamese voters in the state.

SindhuNews- An Ocean of Voices.

Pirjada Ruhul and Khobayeb Open up New Party in Bengal.

AIKCC Leaders Submit a Memorandum in Support of Farm Acts.