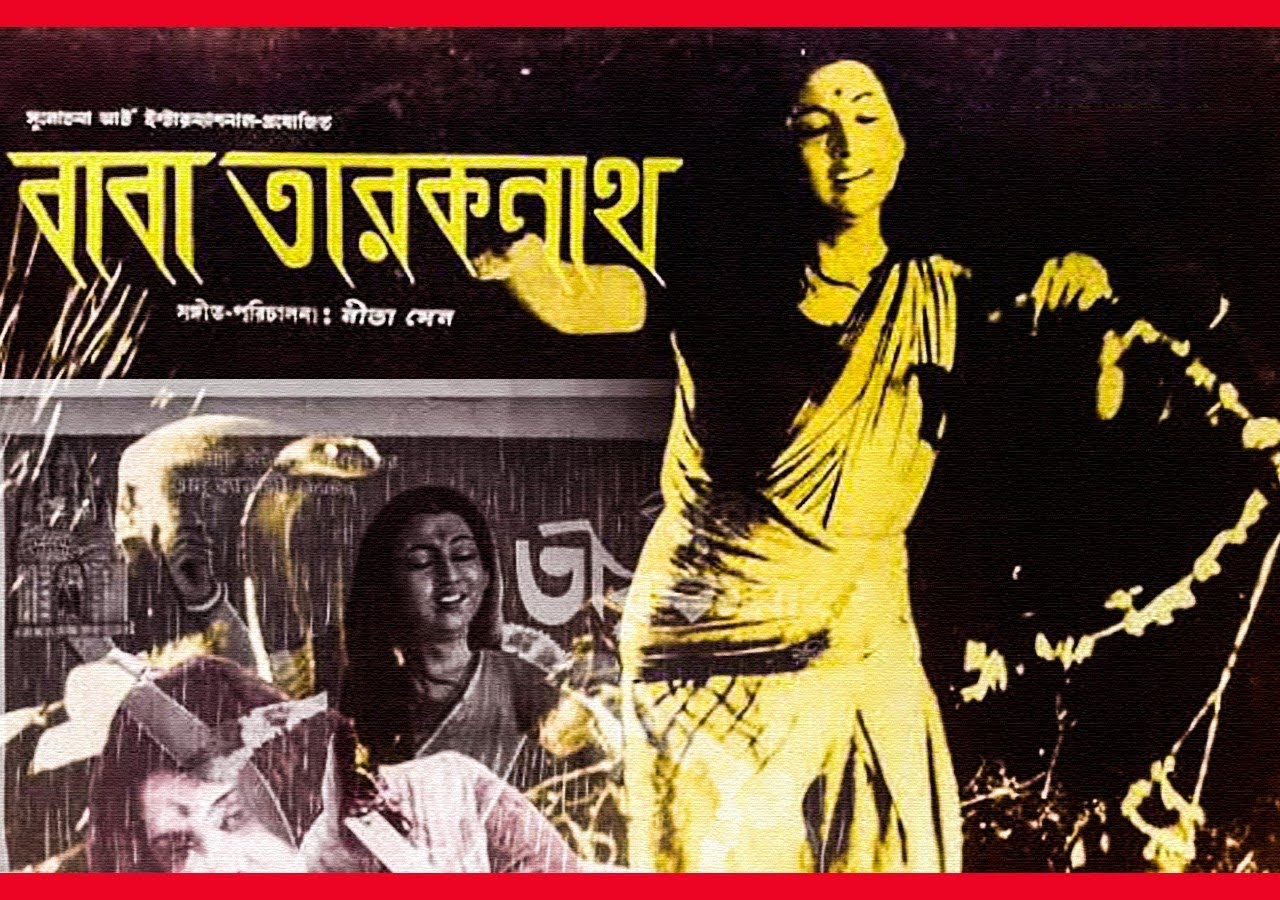 The film ‘Baba Taraknath’, in its time, had achieved a remarkable height of popularity. And what is popular today, becomes a classic tomorrow. Unless a work of art touches our heartstrings deeply, it is not possible for it to become this popular. This film is a reflection of the Bengali, and the larger Indian consciousness prevalent at the time – and thus its deep and wide appeal. Let us revisit the film Baba Taraknath today on Mahashivaratri.

Let us first look at the name of the film. Baba Taraknath. This is not just the name of a specific presiding deity of the teertha. ‘Tarak’ – he who relieves us, he who saves us; ‘Nath’ – the Lord who is capable of both anugraha and nigraha. Moreover, at the same time, he is also ‘Baba’ (Dear Father).

Despite being a deity, he is also a part of our family and home, he is our own, our close kin, to whom we can easily go and hope to be indulged, without any inhibitions. The combination of the ‘tatsama’ and ‘a-tatsama’ gives birth to this title, perfectly symbolising the nature of the deity. In him lies the profound yet simple solution to inter-personal contradiction – despite his limitlessness, he mingles and merges with the smallest and poorest of beings so perfectly!

Now let us discuss some of the specialities of the plot of the film. The film begins with a childless couple praying for an offspring and finally being blessed with one. This part of the story is not a new one, it is a story as old as time itself. The most ancient epic of Bharata as well begins with such a ‘prajaishna’ or ‘quest for offspring’ – the ‘putreshtiyajna’ and the arrival of Sri Ramchandra.

Many folktales of the Bengali oral traditions too begin with such a ‘prajaishna.’ These stories mention various kinds of medicines, practices, and mantras for facilitating the birth of the child. Childlessness is the stagnancy of the human civilization. Childbirth is the vessel and the vehicle of life. And thus, the divine protagonists are born. Baba Taraknath’s Sudha was no exception.

However, there is one difference. Among the many protagonists from our epics – from the sons of Dasaratha to the Pandavas – the novelty of Sudha is that she is a woman, a girl child. By the blessings of our gods, from among the crowds of many sons, such a deviation in the form of a daughter is indeed a rarity. Another example can be found in our Bengali heritage itself – in Satyanarayan’s Bratakatha, Banik-Tanaya (Daughter of the Merchant), who was also born from the blessings of the gods, as a fruit of their blessings. However, she could not become a central to the story, only Sudha could. And thus, Sudha is extraordinary.

Central to this film is the almighty Lord Shiva himself. Bengal is already the land that worships Shakti, so some elements of Shakti Sadhana are evident in this film. Let us begin with one of the early scenes – Sudha is at the site of a tantrik’s vigraha of Dakshinakali, and in place of Sudha, he sees Ma Kali and vice versa, thus his consciousness is becoming clearer. The union of the supreme goddess and the young virgin girl is certainly the fruit of Bengali Tantra-based consciousness.

In this context we may mention another scene. At a dilapidated Shiv temple, Sudha first sings bhajans, and then gets engrossed in dhyana – and she appears in Kailasa with Narada, and gains darshan of both Shiva and Shakti, or Parvati. We then see a giant serpent wrapped around Sudha’s delicate frame. From a theoretical perspective this snake is a symbol of the awakened kundalini, the same shakti due to which Shiva Shakti revealed themselves within Sudha’s consciousness. Another sight of shaktibhavana – Shiva takes the naivedya offered by Sudha and brings it to Uma, and after that he accepts that Shakti prasadam himself.

Let us move on to the context of the music in the film. The film is brimming with music. After every few scenes there is a song. All these songs are not only for the entertainment of the audience/listeners. Music, songs are the route to deliver Divyavani, and Divyatattva to the people of this country, and of the world. For song is the peak of our auditory sensations. If we take for instance the Bengali culture, the Sahaja-yaanicharjageeti, Mangaldevata Geeti-Akhyan, Vaishnav Padabali Kirtan, Shakta Kalikirtan, Baul-Fakir Lokgeeti, or Brahmna sangeet, regardless of the genre, song is close to our hearts, our souls. What we cannot say even through long lectures, we can express through a song in just a few minutes. Let us consider an example.

Remember the gathering of the villagers to celebrate Shivaratri in the film. Dharmik people, on Shiva Chaturdashi, stay up all night; so, to remain awake and keep everyone awake, various programs and performances are organized throughout the night. We see the same happening in the film too. We see a circle of devotees outside the Shiva temple, and the worship of Shiva being observed in the Garbhagriha or the sanctum sanctorum of the temple. Both the places are filled with song, songs of Shiva, but each song is unique.

Inside the temple, in the garbhagriha, the worshipping  Sudha is singing a solemn song, replete with bhakti. Shiva was being worshipped with overwhelming devotion by all his bhaktas.

Sudha’s song floats out from inside the temple –

(With the panchapradeepa and dhupa, I do your arati, Mahadev),

(You fill the endless darkness with light, Mahadev)”

While on the other hand, in the song that was being sung outside the temple, Shiva is a curious domestic man, intoxicated, self-indulgent thanks to the pampering of his minions, Nandi-Bhiringi, and always in conflict (and attempts at resolution) with his wife, Parvati.

The song outside the temple –

(in short, Bholanath has got maddened after seeing the delicate leaves of cannabis.)

Amazing, the tone of these two songs, the feelings that flow through them simultaneously, neither one of them hindering or obstructing the other, flowing in an uninterrupted, perennial, ‘akhanda’ way, such that there appears no opposition between them, against each other.

Another feature of this film – the structural template of the Mangalkavyas entrenched in the roots of Bengal. In the Mangalkavyas we find the conflicting married couple – the wife devoted to the service of the Mangaldevata, and the husband reluctant to believe in the same devata. The Khullana-Dhanapati of the Chandimangala, Swarnarekha-Chandradhar of the Manashamangala, are all based on this structural template. Sudha and Amar- the central couple in Baba Taraknath is also a similar case. However, in the Mangalkavyas, the men are reluctant to believe in the Mangaldevata because they are devoted to another devata. Here, Amar’s devotion is not to any other devata but rather, to Science. This is a sign of the modernity inherent in this film.

In the Mangalkavyas, the unfortunate men are finally saved by the faith of their wives, and they submit themselves to the deity worshipped by their wives. Like Chandradhar and Dhanapati, Amar too went through the same experience. The hero dies from the bite of a serpent, and the woman prays ardently to her deity who then saves the man and gives him a new lease of life – we can easily see the influence of the tales of Behula-Lakhindar here. But it does not end there. I’ve already mentioned that the serpent here is a symbol, a symbol of kulakundalini. The shakti which when worshipped fulfils the woman, is the same shakti which when neglected, harms the man. Ultimately, the woman’s fulfilling worship saves his life.

In this climax, in this extreme point of the play, we have the melodious song dedicated to Mrintyunjoy Shiva – “Aj tomar pariksha Bhagabaan” (Today is your test, O Lord!). In this song we do not find the wailings of the troubled bhakta; instead, we find the siddha bhakta throwing a challenge to the deity. The bhakta demands proof of the deity’s might! In this song we see anguish, a march of intensely energised women, Ahalya of Ramayana, Draupadi of Mahabharata, Savitri of the Puranas, Sudha stands here with historical women like Meera.

This deity too is not any specific deity. At this extreme point, in the garbhagriha of the temple, the Shiva Lingam is no longer visible, one can only see an adorned divine object. Shrouded in mystery, the idol no longer remains a mere representative of the deity, it becomes the unseen, inexplicable existence, the collective effervescence of innumerable believers, the confluence of their devotion. The blood red and white of his adornment tells us that he/she is the union and unity of purusha and prakriti, the male and the female. He is the supreme being, the paramdevata, throughout time, worshipped by all bhaktas, and the united form of all deities.

Thus Sudha reminds him, “You, my Lord, were kind to Savitri and Ahalya/ to save your face you answered Draupadi’s anguished cry..” or, “Have you forgotten that you had given a boon/husband[1] to Behula?” and, Sudha challenges him, aggressively addresses him, does the deity even have the power to make her a widow and wipe off the signs of her marriage? The audience to this is not only the deity, he is enthralled at the bhakta’s intense, challenging energy.

“Je tumi Ravan ke vinash korechho aaj kothaaye, uttor dao! (You, who had defeated Ravan, where are you today? Answer me!)

At the end of this song, we realize the real form of the supreme deity. He is Shri Krishna himself, “Krishnastu Bhagawan Swayam” – who in every era destroys evil, saves the good, and reappears to restore Dharma in many ways. In the change of the poison to the elixir can we find the intense mystic energy of this deity.

This song is a song that takes us from death to life, from parts to the whole. The atma of all beings is always immortal ‘Amar’, and yet, sometimes, due to force of habit, it strays from its path. At that point, the power that restores its balance and brings it back to its path, is ‘Sudha’. This deity thus is the Jeevan-devata of all human beings. To this deity mankind has prayed since time immemorial.

From 33% to 8% – The Vanishing Hindus of Bangladesh: An Interview with Richard Benkin.

Mexican President Demands an Apology From The Roman Catholic Church.