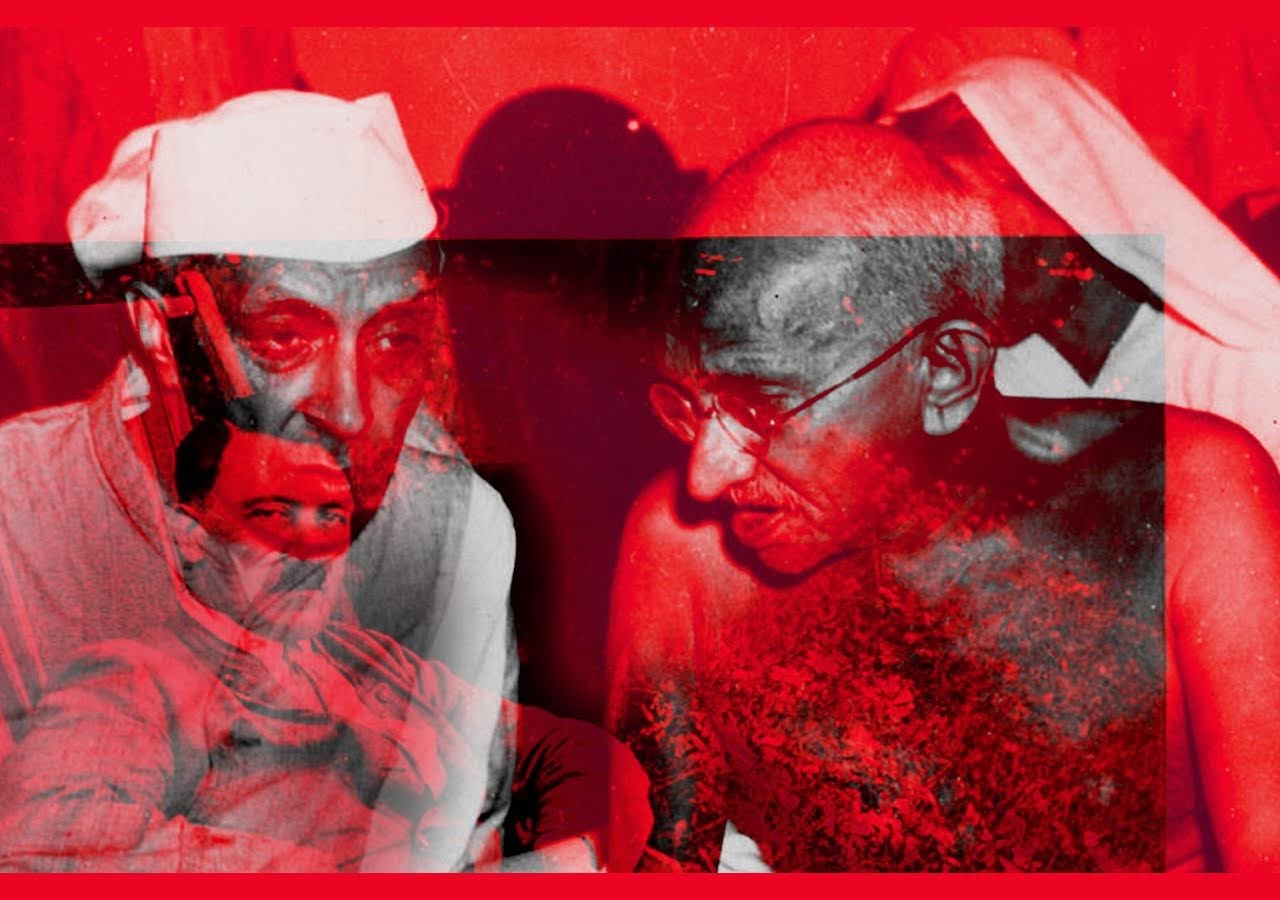 There is no denying the fact that Mahatma Gandhi and Adolf Hitler were two of the major yet vastly contrasting personalities of the 20th century. Both of them were poles apart by virtue of their thinking, philosophies, ideologies, and actions yet both equally contributed to shaping the course of history in their own unique ways.

If we look back at Gandhi’s life, it becomes very evident that Gandhi had a profound admiration for the Europeans since he strongly believed that similar to the people living in European colonies around the world, the people of Europe were also the victims of the avaricious and exploitative colonial structure that Europe had developed in the name of modern civilization.

Gandhi felt that in the aftermath of the First World War, the whole of Europe had almost completely surrendered to the belief that violence could only be contested by a superior destructive force. Therefore, he believed that it was his duty to enlighten those engaged in authoritarian rule on the vast possibilities of non-violence. To him, non-violence was not the weapon of the weak but of those spiritually superior.

Following the Delhi Pact of March 1931, when Gandhi was busy with analysing the course of politics between India and England, he travelled to London to join a roundtable. On his way back to India, Gandhi stopped by in Rome where he met with the Italian dictator Benito Mussolini.

Gandhi’s meeting with Mussolini would have possibly erased from the pages of history had Gandhi not written a simple note in his diary.  “At 6 o’clock, Mussolini.” This cryptic note in Gandhi’s diary from 12th December 1931, is the only record that Gandhi had met Benito Mussolini in Rome.

Sure enough, Gandhi met the authoritarian ruler who had created the Fascist Party in 1919 and had been the country’s prime minister since 1922 with the intention to guide him towards a non-violent path of leadership. However, as it seems, conversations with Gandhi had little impact on Mussolini, as he led Italy to invade Ethiopia in 1935.

Meanwhile, the Nazi aggression of Germany and the ruthless dictatorship of Adolf Hitler and his inhuman treatment of the Jews had tormented Gandhi. In November 1938, Gandhi published an article about the two questions that were to dominantly preoccupy the Jewish world, Nazi Germany and the conflict in Palestine. In his article, Gandhi not only suggested but rather demanded the European Jews to adopt his strategy of Satyagraha (Non- Violence) against the Nazi rule and Hitler’s outrageous racist violence. This unexpected demand from Gandhi raised a wide range of critical responses among the Jewish intellectual community.

In his 2014 paper, Melting Hitler‘s “Heart of Stone”: Gandhi‘s Attitude to the Holocaust, Shimon Lev mentioned how in response to Gandhi’s idea of Satyagraha against Nazi Germany, Jewish intellectuals Martin Buber and Judea Leon Magnes wrote to Gandhi arguing that Gandhi had failed to see the fundamental differences between Nazi Germany and the situation Gandhi had faced in South Africa. Though they did not doubt the very idea of Satyagraha, they opined that doing so in Germany would result in mass killing rather than earning positive result.

Buber was himself a victim of Nazi brutality and was compelled to flee the country. He argued that what happened in South Africa or was happening in India under British rule was in no way comparable to Hitler’s Germany. Buber believed no Jews leadership of Gandhi’s stature could ever emerge against Nazi rule. In his response to Gandhi’s demand, Buber said, “Jews are being persecuted, robbed, maltreated, tortured and murdered. And you, Mahatma Gandhi, say that their position in the country where they suffer all this is an exact parallel to the position of Indians in South Africa at the time you inaugurated your famous “Force of Truth” or “Strength of the Soul” (Satyagraha) campaign…Now do you know or do you not know, Mahatma, what a concentration camp is like and what goes on there? Do you know of the torments in the concentration camp, of its methods of slow and quick slaughter?”

Buber further attacked Gandhi’s idea of Satyagraha by sharing his traumatic experience of living in Nazi Germany. Buber said, “Do you think perhaps that a Jew in Germany could pronounce in public one single sentence of a speech such as yours without being knocked down?… In the five years I myself spent under the present regime, I observed many instances of genuine Satyagraha among the Jews, instances showing a strength of spirit wherein there was no question of bartering their rights or of being bowed down, and where neither force nor cunning was used to escape the consequences of their behaviour.”

Similar to Buber, Judea Magnes who himself was a pacifist criticised Gandhi. Magnes emphasised that even though Gandhi was a very practical as a leader and his Satyagraha campaign was very strategically planned, he failed to understand that the situation in Germany was completely different from South Africa or even India. Magnes’ point was that even if Jews launch the Satyagraha movement it is likely to receive no public attention. He wrote, “The streets are the same. Business goes on, as usual, the casual visitor sees nothing…life is snuffed out like a candle, and no one sees it or knows that the light is out.”

In less than one year of Gandhi’s controversial article suggesting Satyagraha, the Second World War broke out in 1939. Gandhi was deeply troubled as the devastating war threatened all humanity. He saw the possibility of the complete destruction of the countries involved in the war. Even though Gandhi hailed from a country whose people had been exploited and tortured by every possible way in the hands of Europe, he could not think of gaining freedom at the cost of the ruin of England, France or Germany and complete massacre of their people.

In 1939, less than two months before the Second World War broke out, Gandhi decided to make an appeal to avoid the war by writing directly to Nazi dictator Adolf Hitler. Gandhi went on to write two letters to Hitler, one in 1939 and the other in 1940. Though critics see these letters from Gandhi as a rather naïve attempt, Shimon Lev, in his 2014 paper argues that Gandhi was far from being naïve.  Lev writes, “Gandhi was far from being naïve, and his actions emanated from his profound belief in non-violence and the principles of Satyagraha, according to which one must do everything possible to be considerate of one’s enemy and understand him in situations of conflict.” (Lev 50)

Gandhi knew very well that the only thing Hitler was fond of was applying brute force. Yet, as a follower of the path of truth and non-violent opposition, Gandhi felt it is his duty to request both Hitler and Mussolini to reject the path they had chosen and end the war. Gandhi believed, since both of them were human beings, they too had the natural capacity to differentiate between truth and falsehood.

In the first letter, Gandhi maintained a polite tone and said, “Friends have been urging me to write to you for the sake of humanity. But I have resisted their request, because of the feeling that any letter from me would be an impertinence…It is quite clear that you are today the one person in the world who can prevent a war which may reduce humanity to the savage state.”

However, Gandhi’s words had no impact on Hitler and nearly a month after Gandhi’s letter, Hitler’s military invaded Poland on 1st September 1939. Thus began the Second World War.

In his second letter to Adolf Hitler, written in December 1940, Gandhi took a more strict stance and criticised Hitler for starting the Second World War. “We have no doubt about your bravery or devotion to your fatherland, nor do we believe that you are the monster described by your opponents,” Gandhi told Hitler in the second letter.

Here is what Gandhi saidin his two letters to Adolf Hitler,

Friends have been urging me to write to you for the sake of humanity. But I have resisted their request, because of the feeling that any letter from me would be an impertinence. Something tells me that I must not calculate and that I must make my appeal for whatever it may be worth. It is quite clear that you are today the one person in the world who can prevent a war which may reduce humanity to the savage state. Must you pay that price for an object however worthy it may appear to you to be? Will you listen to the appeal of one who has deliberately shunned the method of war not without considerable success? Anyway I anticipate your forgiveness, if I have erred in writing to you.

In spite of this stance in favour of non violence, Gandhi’s support of the Indian armed forces supplementing the Allied Forces during the World War is well known. It is also a foregone  conclusion that Gandhi’s support of the British military might against the Nazis possibly paved the way for a definite split in the leadership of the Indian National Congress during the president-ship ofSubhash Chandra Bose.

One might conjecture as to how Gandhi might have approached this delicate world political impasse more delicately, and with better political acumen than rather sticking to hisideal of non violence. As Buber has been mentioned as saying earlier, Gandhi’s self conscious non violence perhaps had indeed clouded his political judgment. That also might be one of the reasons why the Congress wavered in the face of the Muslim League’s call for a paak-i-stan, a land of the pure Muslim which eventually had to be carved out of the Indian Nation’s heart and flesh.

SC Directs All Indian Courts To Refrain From Moralistic Commentary.

Swallowtail Butterflies And Rare Moth Spotted In Uttarakhand After 125 Years.