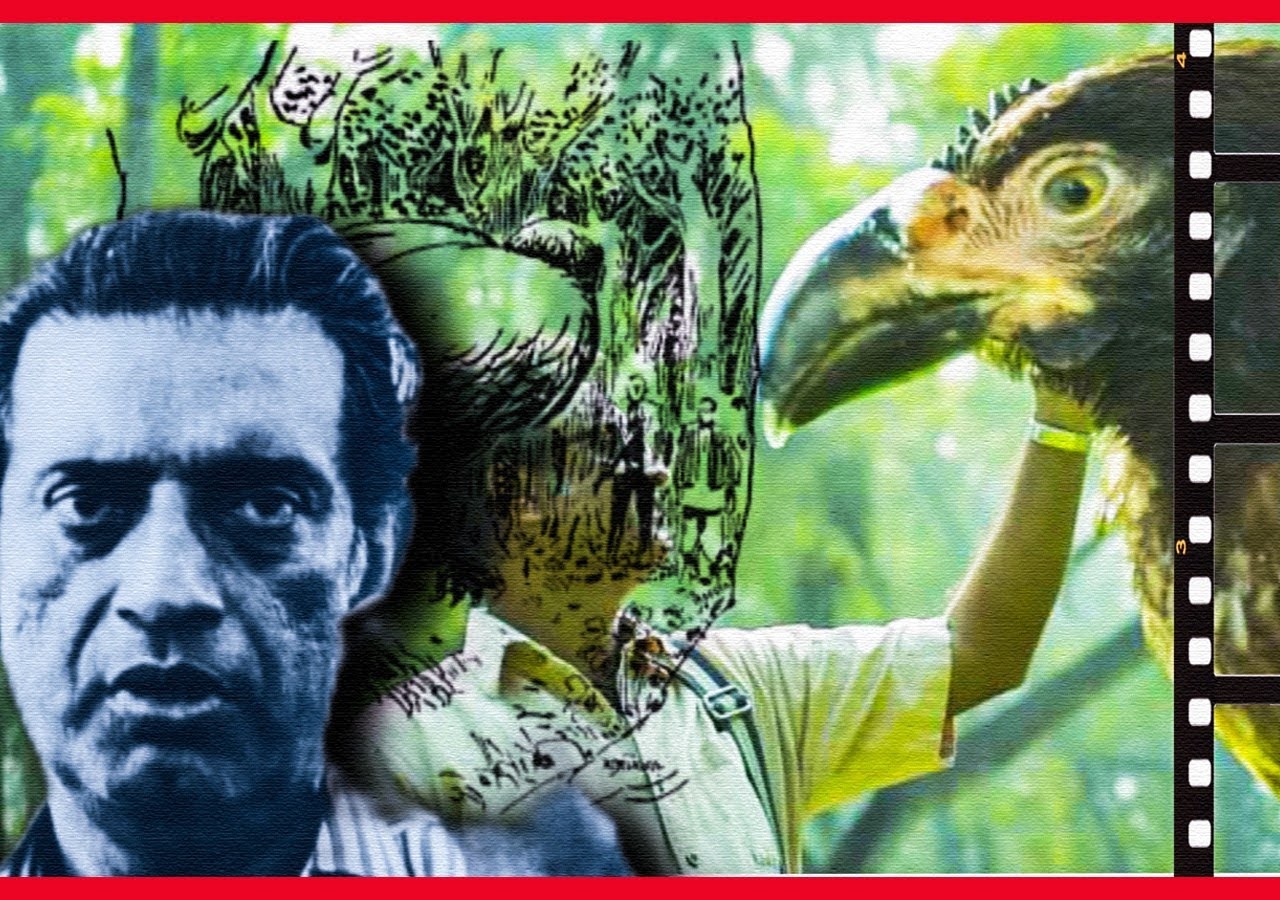 In the Aranya Kanda of Ramayana, a gigantic bird named ‘Jatayu’ is mentioned, whose habitat was in the Dandaka forest (now situated in Chhattisgarh). On Falgun, 1386 Bangabda, Satyajit Ray wrote a short story “Brihacchonchu” (A Bird with a Gigantic Beak) in the ‘Sandesh’ Magazine.

The protagonist of this story was a pre-historic bird, mysteriously born in the modern age, in the same spot as Jatayu’s habitat called Dandaka. Now, on the occasion of Ray’s birth centenary, an independent film “Chonchu” has been made by Abir Roy and his team. It was released in Youtube recently. It was there online for a week, giving the audience a pleasing opportunity to enjoy it without any expense.

The plot of the film is placed in the year 2019, and some addition-alterations are done for the sake of cinematography. Screenplay, editing and direction are done by Abir Roy, cinematography by Anirban Choudhuri, production design by Dipankar Goswami. Soumyabrata Saha has shown his expertise in background music and sound designing in the film. Chonchu is a Dream City Artist Premium Production.

Here we can reveal a little about the plot. Tulsi Babu, an admirer and serious practitioner of Traditional Indian Ayurveda, goes to Dandaka forest with his friend and collegue Pradyot Babu, and discovers a gigantic egg there. The egg was broken in front of them, and a huge baby bird appears and follows Tulsi Babu. He brings the bird home to Kolkata, and goes on taking care of it just like his own offspring, naming it ‘Chonchu’.

But the fierce propensities of the bird come out day by day. It is strictly carnivorous in nature, has an amazing growth rate with great physical strength, has cold and cruel eyes with a frightening voice. After the bird manages to destroy its cage and ends up killing a pet cat, Tulsi Babu decides to banish it to its natural birthplace, the Dandaka forest.

Chonchu, after being separated from the company of Tulsi Babu, becomes more and more furious and starts killing domestic animals for its food, gradually becoming a man-slayer. On the other hand, Pradyot Babu discovers with amazement that Chonchu belongs to such a species which has been extinguished from the earth approximately 3 million years ago! Both of them go again to Dandaka forest, to end the risk that is Chonchu by any means possible. How do  they succeed? What happens is a remarkable application of Indian Ayurvedic tradition. We are not mentioning that aspect of the film here, leaving the reader or audience in curiosity.

Satyajit Ray’s short stories were not as popular as his creations like Feluda and Professor Shonku series. But by the remarkable audio presentations of Sunday Suspense Team, many of his short stories have become popular among common audiences. Nowadays new trends of enjoying a book has come, not by reading, but listening to its audio version. A film, having both audio-visual impacts, has much more appeal among youngsters, and following that trend ‘Chonchu‘ also has achieved a tremendous fan base just in a few days.

Ray’s centenary is celebrated delicately throughout this work. The Housing Complex of TulsiB abu is named ‘Manik Smriti Abasan’ here. The scientist (starring the director himself) has the song “Maharaja tomareselam” (From Ray’s masterpiece ‘Gupi Gayen Bagha Bayen’ film) as his phone’s ringtone. In the first killing scene in the jungle-house, the lightening on the clay-image of Ganesha reminds us the very scene before Durga’s passing away in ‘Pather Panchali’. Audience with insight can find out so many ones. A ‘Ray’ intertextuality is unmissable here.

The first and most prominent point about this film is a great usage of VFX effect in an independent film’s limited budget (Colour Grading and VFX are done by Dream City VFX here). All the scenes of the “Terror Bird” were so natural and lively! We think this film will be a milestone in the Bengali Film Industry, proving that budget is not a barrier if one has enough enthusiasm, artistic expertise and hard work up one’s sleeve.

Like in many other stories of Ray, a third person narrative was presented in “Chonchu”, the narrator being an omnipresent and omniscient entity. Some thoughts and views from the perspectives of Tulsi Babu and Pradyot Babu were included in that narrative. In the film, the director has followed this style, but added a new perspective also. A perspective, not of any human, but the very bird, the protagonist herself! A bird’s eye vision with extensive usage of magenta and green was used to differentiate the vision of Chonchu from the human ones.

At the time of its birth, a view from within the egg-shell is presented in the film. We see, in the eyes of Chonchu, the breaking of the shell and the revelation of the outer world in front of her eyes, and how the curious face of Tulsi Babu appears as the first scene of the world to the bird. It is just like a blur sight, seen by a new born human baby, who sees his/her parent as the first entity after coming out from the womb.

As time passes, Chonchu’s view becomes more and more clear. The very grief of Tulsi Babu for his childless life was soothed by the arrival of this baby, and a new horizon of parenthood is manifested, which is not only beyond caste and creed, but also transcends the barrier of species, the ego of humanity.

Although Pradyot Babu asked about the baby’s gender, any specific answer is not given in the Bengali dialogue throughout the whole film. Ray, the story writer was completely silent about it. But here in the film, the English subtitles are made by the very film-maker team, and the solution is revealed there clearly.

Chonchu the bird is referred to constantly with the pronouns “her” and “she”- telling us clearly about the bird’s femininity. In the last scene also, we can see three new eggs (probably laid by Chonchu herself), ready to break out, in the very same spot where Chonchu was born. It gives us an idea about the uninterrupted flow of the species throughout millions of years. Ray was silent about this continuity, so it is an addition by the film-maker, which is worthy of high admiration.

Here Chonchu stands for the primitive Nature, which is not a flowery cute maiden pictured by romantic effusion, but has a fierce hunting attitude, very much a misfit in the so-called city-centred modern civilization. She is furious and deadly towards her prey, and towards the hunters who try to execute her. But, if treated with care and hearty affection, that primitive ferocious form of Nature can be a very good friend of mankind, saving him from fatal dangers and giving him company just like an affectionate friend. And man also, can tame the roughness and killing attributes of Nature, without harming her, but applying his sustainable intelligence. That timeless fact is revealed throughout the story, and the film- and that universal truth is its most pleasing appeal.

‘There were Worms Inside my Wounds’: Lebanon’s Inhuman Torture of Syrian Refugees.

Not Waving But Drowning (Stevie Smith) – A Poetry Comic by Julian Peters.