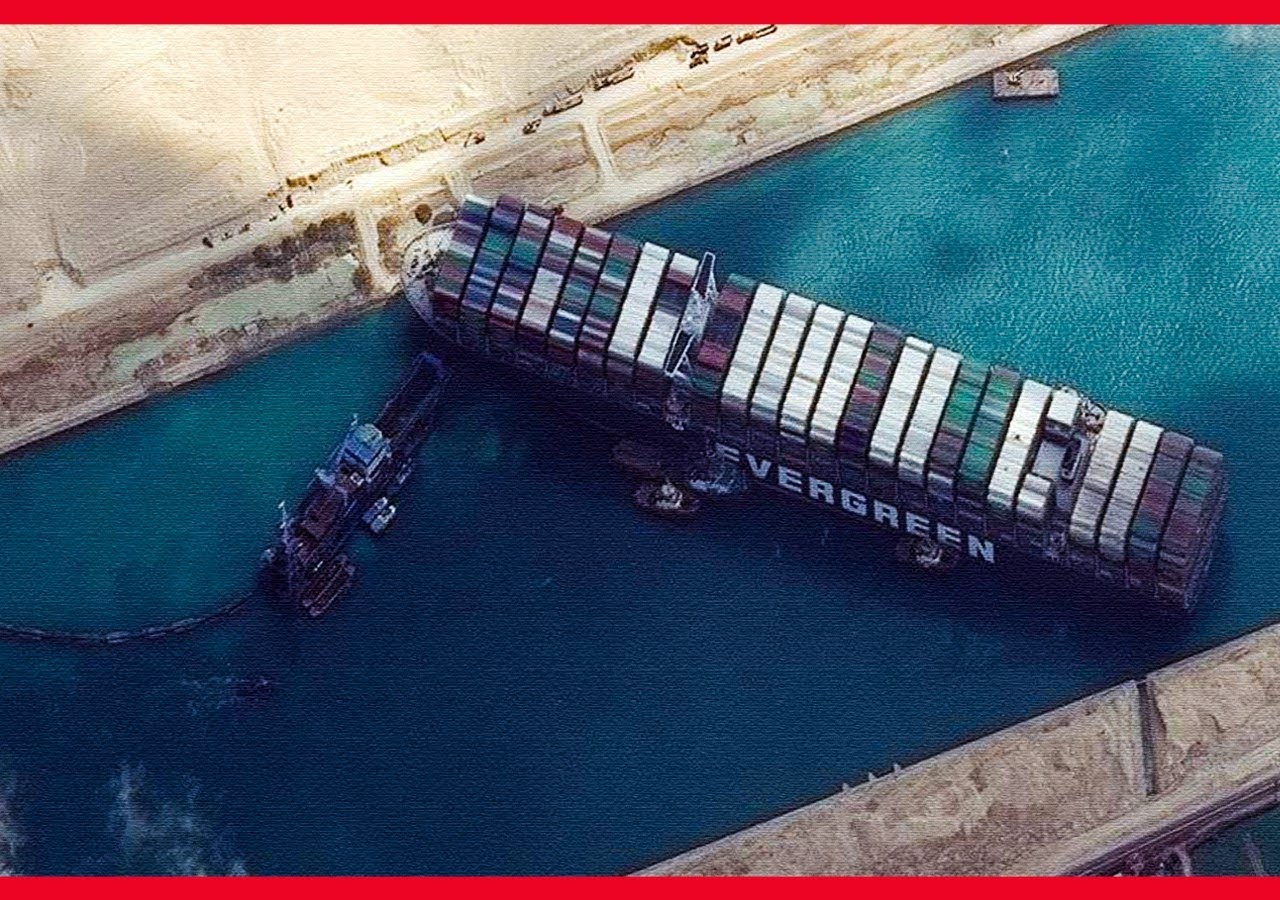 The massive 1,300-foot, 222,000-ton colossal container ship which has been blocking traffic in the Suez Canal for nearly a week was finally pulled free on Monday (29 March 2021) by salvage crews. The move has ended a crisis that had blocked one of the world’s most significant waterways and halted billions of dollars a day in maritime commerce. This ‘Ever Given’ container ship became jammed diagonally across a southern section of the canal in high winds early on March 23, halting traffic on the shortest shipping route between Europe and Asia.

The Panama-flagged, Japanese-owned cargo ship, which is operated by Taiwan-based Evergreen Marine, was originally destined for Rotterdam, Netherlands. However, the ship could be diverted to another part for repairs, if necessary. This is the largest container ship in operation, nearly twice as long as the canal’s width.

How did the ship get stuck?

On 23 March 2021, the ‘Ever Given’ was travelling through the Suez Canal, when it got caught in a sandstorm. The strong winds resulted in the “loss of ability to steer the ship” that caused the hull to deviate. The ship then ran aground, turned sideways, and found it unable to move itself freely, thus resulting in the blockage of the canal on both sides. The crew which consisted entirely of Indian nationals was accounted for and no injuries were reported. When the incident occurred, the ship was on its way to Port of Rotterdam arriving from Tanjung Pelepas, Malayasia.

However, the Suez Canal Authority (SCA) has launched an investigation on Wednesday (31 April 2021) into what actually caused the vessel to run aground in the canal and block the waterway.

How was it freed?

The salvage crews had faced a daunting challenge after the ship ran aground in high winds and a sandstorm which reduced visibility. A Dutch specialist team, SMIT, oversaw a flotilla of 13 tugs, which are small but powerful vessels that can shift large ships, as they tried to dislodge the ‘Ever Given’.

Dredgers, which are basically boats fitted with a special machine used to increase the size of canals, were soon brought in. The machine helped digging 30,000 cubic metres of mud and sand from beneath the ends of the ship. Two dredgers played an important role in freeing the container ship, one is the 10th of Ramadan and other is the Mashhour, both owned by the Suez Canal Authority.

Over the weekend, it was feared that some of the ship’s cargo would have to be removed in order to lighten the load. The cargo consists of nearly 18,000 containers. But high tides helped the tugs and dredgers in the work and on Monday (29 March 2021) morning, the rear side of the ship was freed and the ship swung across the canal. Hours later, the front of the ship also came unstuck, and the ‘Ever Given’ was able to move out freely.

All ships stranded by the grounding of the ‘Ever Given’ have passed through the canal by Saturday (3 April 2021), ending the backlog that built up during the blockage, the canal authority informed. The last 61 ships that were queuing when the vessel was dislodged, passed through the vital trade artery.

How much has the blockage cost?

The blockage on the canal kept several companies on their toes. While daily costs piling up, some had to reroute the ships, which means several more days of travel time, fuel and miscellaneous costs for the 360 vessels. It has been estimated that over 9.6 billion dollars’ worth of goods are held up. Egypt alone lost nearly 12-15 million dollars a day. According to data from Refinitiv, a global provider of financial market data and infrastructure, Egypt incurred a total loss of over 95 million USD.

On Thursday (25 March 2021), the price of oil and petroleum lost about 4%, before starting again and closing higher the next day. As the ship was freed on Monday (29 March 2021), the world oil prices eased. Despite delays in delivering the crude oil, stocks are still huge enough to absorb the impact, said Toril Bosoni, head of the oil market division at the International Energy Agency.

In a matter of days, prices of natural gas elevated, and there are concerns that the food supply chains will also be affected due to the backlog.

Taking a look at the bigger picture, the German insurer Allianz said on Friday (26 March 2021) that its analysis showed that the canal blockage could cost the global trade between 6-8 billion dollars a week and reduce the growth rate of the annual trade by 0.2 to 0.4 percentage points.

The Wall Street Journal stated that as per the shipping broker Braemer ACM, the cost of renting some vessels to ship cargo to and from Asia and the Middle East had jumped 47% to 2.2 million dollars.

Some vessels have been rerouted to avoid the Suez Canal which adds around eight days to their total journeys.

As a result of the blockage, countless businesses, from domestic transport providers to retailers, supermarkets and manufacturers were also heavily impacted.

SCA seeks over $1 billion for losses:

Why is the Canal so important?

The Suez Canal has been one of the most important waterpassages on earth, a major lifeline for global sea tradeand a centre of conflict since it was completed in 1869. It is a man-made canal in Egypt that connects the Mediterranean Sea to the Red Sea. The canalis a portal between East and West that has been controlled by a number of countries, threatened to ignite war, and become a bedrock of the global economy.

The importance of the Suez Canal originates first and foremost from its location, which is the only place that directly connects the water bodies of Europe with the Arabian Sea, the Indian Ocean and also the countries of the Asia-Pacific.

Without this particular canal, shipments travelling between those parts of the world would have to transverse the entire continent of Africa, hugely multiplying their costs and substantially extending their journey period.

Each year, about 12% of world trade passes through this canal.The time saved by this canal passage is almost invaluable. The passage is significant as there is no alternative to the Suez. As per the Lloyd’s list, the canal’s strategically important position is that it hosts nearly 19,000 vessels each year.

Both the Indian government and the seafarers’ organisations are concerned about the legal issues that the crew consisting of 25 Indians may face, including the possibility of criminal charges. It is also predicted that the captain and some of the crew members may be restrained from travelling further.

They could be placed under house arrest till the accident is properly investigated. The ship management, however, has not given any certainty about the legal procedures the crew will have to go through.