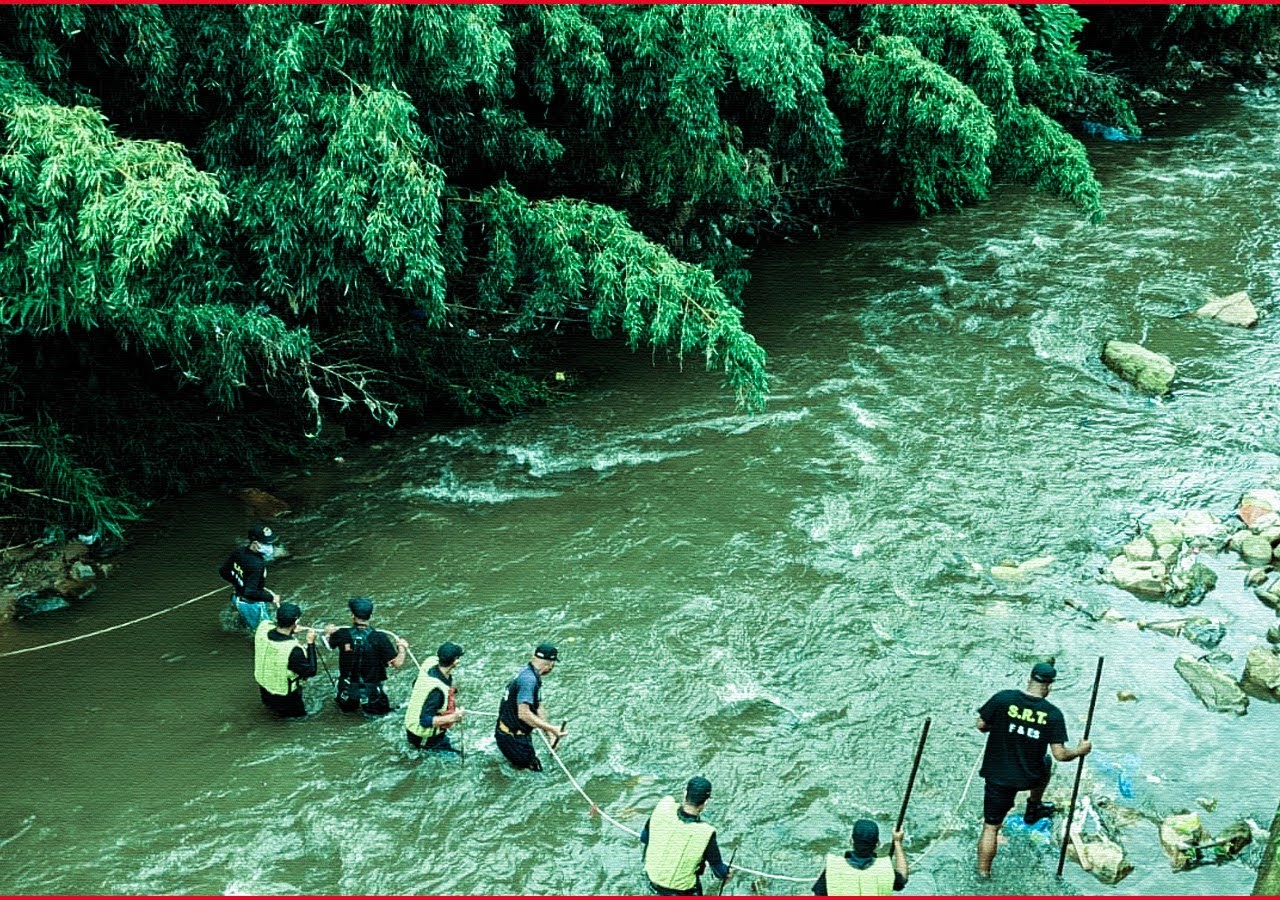 On Monday (22 August 2021), the Search and Rescue Team (SRT) of the Fire and Emergency Services of Meghalaya Police managed to recover all the 3 Indian Small Arms System(INSAS) rifles of the police which were snatched by masked miscreants on the day of the funeral of former Hynniewtrep National Liberation Council(HNLC) leader, Cheristerfield Thangkhiew on August 15.

The rifles had been snatched along with a police vehicle from the Umshing-Mawkynroh outpost. Brandishing a gun, the unidentified miscreants drove the vehicle for a while before setting it afire at Jaiaw Pdeng main road the same day.

The incident reflected the public anger over the alleged “fake encounter killing” of the HNLC leader by the police at his residence in the wee hours of August 13.

The 11-member SRT team was rushed below Umpohliew Bridge above the Umkhrah river, on Monday (22 August 2021)for searching the rifles after an anonymous letter, sent to a media outlet two days ago, had claimed that the weapons were tossed into the said river.

After a search of more than an hour, the SRT team recovered the rifles.

G Muktan, the in-charge of the SRT team stated that the personnel had carried out the search from downstream as suggested by the police.

“We recovered the arms after coming around 40 meters upwards. We used a rope for anchoring and it was mainly a physical search,” Muktan said.

Home Minister Lahkmen Rymbui asserted that the appeal made by the traditional heads and various organisations led to the recovery of the weapons. The heads heaved a sigh of relief on getting to know that the weapons have finally been recovered by the police.

“At first, we were not sure if we should believe the content of the letter. But now it seems that there are still honest people in this state,” SB Kharbangar, Rangbah Shnong of Jaiaw Laitdom, said.

Meanwhile, Asst. IG GK Iangrai said that Meghalaya Police expressed their sincere gratitude to the Rangbah Shnong of Mawlai Town Dorbar(MTD) for its consistent support and to the youth who had anonymously informed the police through the letter.

The MTD has asked the Meghalaya government to do away with the peace committee formed after the breakdown of law and order in the city, arguing that peace and harmony has returned in Mawlai area.

Talking to The Shillong Times on Monday (22 August 2021), MTD president SD Khongwir said that they had suggested it during their recent meeting with CM Conrad K. Sangma and Deputy CM, Prestone Tynsong.

According to him, the Rangbah Shnong of Mawlai area have endorsed the need for redeployment of security forces in the area, especially police personnel from the traffic branch.

Khongwir further went on to say that they had convened a meeting with the Ka Sur U Nong Mawlai to deliberate on the area’s prevailing situation. “It was very encouraging to see them come up with constructive suggestions,” he added. He also highlighted that the meeting suggested the need to form the Seng Longkmie Mawlai Pyllun, a conglomeration of women organisations from various Mawlai localities.

“We recognized the role and contribution of women for the betterment of the locality. The president, vice president and general secretary of the SLMP will be ex-officio members of the MTD,” Khongwir added.

Meanwhile, on Monday (22 August 2021), PT Sawkmie, Opposition Chief Whip and Mawlai MLA, held a meeting with various NGOs of Mawlai and appealed them to uphold peace and tranquillity in the constituency.

“However, our demand for suspension of the officers involved in the encounter still stands. They have to be suspended to facilitate a free and fair probe,” Sawkmie said, adding that the officers will be restored if the investigation finds no wrongdoing on their part.

Roads Cannot Be Blocked, Protests Or Not: Supreme Court of India.

Bhuragaon Rape: DNA From Accused Matches with Sample From Victim.